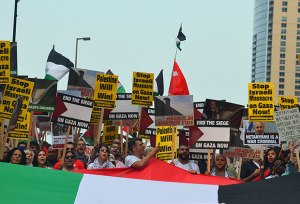 Today, in a historic march in Chicago, 10,000 people from across the Midwest came to Chicago to hold a demonstration against the Israeli massacre in Gaza. The demonstration began with a short rally followed by a march which shut down most of downtown Chicago.

Downtown Chicago was a sea of Palestinian flags with organized car and motorcycle contingents circling the streets hoisting large black, white, green and red flags. The local media, which usually is very bad at covering these large pro-Palestinian demonstrations, gave the protest more and better coverage than we can remember.

During the march, militant chants of “Killing Children is a Crime! Free Free Palestine!” and “Netanyahu: Terrorist!” filled the Chicago streets. The march ended at the Israeli Consulate where a rally was held as the crowd still chanted.

A rally speaker with the Students for Justice in Palestine from Milwaukee, Wisc. stated, “We are the generation that in our life time we will see a free Palestine, a free Gaza!”