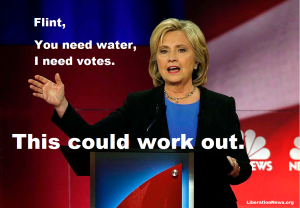 In Flint, Michigan on March 6, Hillary Clinton will drink clean, and probably bottled, water before taking the stage for the Democratic debate. Outside thousands of people living in Flint will continue to drink poisoned and toxic water. It has now become a national scandal that for the past two years, 110,000 people, including 9,000 children, have been consuming water with unacceptably high levels of toxic lead.

It’s no surprise then that Clinton is desperately spreading the lie that she cares about Flint. Clinton and the Democratic establishment that support her have been traveling around Michigan calling on all the media outlets to create this mythical image of Clinton as a champion of the people, an image convenient for her as the Michigan primary will occur just two days after the Sunday debate between her and Bernie Sanders.

Clinton has been quoted as saying “Clean water isn’t optional my friends. It’s not a luxury,” and “If what is happening in Flint had been happening in Grosse Point or Bloomfield Hills [more affluent and white communities], it would have been solved yesterday.” Before leaving for Michigan, Hillary told New Hampshire’s WMUR television station, “It is so fundamentally wrong that people would allow children to drink and bathe in poisoned water. It’s so wrong.”

It does not take a long look into her campaign to see the real truth, which is that Hillary Clinton doesn’t really support Flint. While Clinton makes empty statements of solidarity to Michiganders, she keeps millions of dollars in anti-environmental profit in her back pocket and has promoted the very policies that led to Flint’s catastrophe.

In a Huffington Post article titled “Hillary Clinton’s Biggest Campaign Bundlers Are Fossil Fuel Lobbyists,” it was written that, “Nearly all of the lobbyists bundling contributions for Democratic presidential candidate Hillary Clinton’s campaign have at one time or another worked for the fossil fuel industry.” ExxonMobil executive, Theresa Mary Fariello, raised more than $21,000 for the Clinton campaign, in addition to a former TransCanada Keystone XL lobbyist Gordon Griffin’s $100,000 in contributions. Pro-environment organization 350 Action wrote on its website regarding this topic that, “the Clinton Global Initiative has accepted millions of dollars from major fossil fuel companies.” It’s these very same fossil fuel companies that Hillary takes money from that have been poisoning our communities, just like Flint, for decades.

In 2005 as a New York senator, Clinton opposed a ban on a fuel additive MTBE that had already contaminated the water supply of over 15 million people. According to an IBT article “Seventeen states ultimately joined together in lawsuits against the major producers of the compound, including ExxonMobil–which became a major Clinton Foundation donor.” Environmental laws are some of the only protections we have to protect our communities. This is what could have protected the people of Flint, if it wasn’t for the politicians who have negotiated down the people’s welfare over the interests of corporate production.

One of the legacies of Hillary Clinton through her 2009-2013 term as Secretary of State was to push fracking, a highly polluting and dangerous form of energy extraction, onto other developing countries internationally. In the online article from Mother Jones, “How Hillary Clinton’s State Department Sold Fracking to the World,” author Mariah Blake wrote that, “Under her [Clinton] leadership, the State Department worked closely with energy companies to spread fracking around the globe.” It was revealed that this push was done in part to expand the wealth of fossil fuel companies and to undermine the economic development of other countries by compromising their environmental safety. These policies, promoted by Clinton internationally, were met with very large protests because they are detrimental to the peoples’ well being. These policies hurt the working class, because just like in Flint, companies conspire with corrupt capitalist politicians against the favor of the people.

4. Clinton takes away resources from workers and is pro-austerity

It has become increasingly clear that the true cause of the crisis in Flint results from the cuts to the city’s budget, forced down the people’s throats by Michigan Governor Rick Snyder. Snyder, who should now be on trial for crimes against humanity and criminal negligence for covering up Flint’s water crisis, was merely following the national trend of austerity. Hillary Clinton has throughout her different posts and administrations been complicit with, voted for, and encouraged the cutting of welfare Social Services. It was during the Bill Clinton administration in the 1990s, in which Hillary served as much more than First Lady, that the most dramatic cuts were made to social services. It was during her term as the Secretary of State that the policies of saving money at the people’s expense were pursued, as Salon.com published, eventually led Flint to change its water supply directly to the Flint river in 2014.

As the debate between Hillary Clinton and Bernie Sanders goes forward, we must understand the true legacy of the Hillary Clinton administration. She is not a champion of the people, nor a champion for the environment. Her expressions of support to the people of Flint are not based on principled solidarity, but instead are a tactical maneuver to desperately acquire much needed votes. The Democratic establishment is promoting this “people’s champion” image because they are determined to push Sanders out of the race and prevent his liberal policies from getting back into leadership of the party.

Only a revolutionary workers’ movement can permanently fix Flint’s environmental crises. Only the people can protect their communities, jail Governor Rick Snyder and all the criminals responsible for Flint’s and all other silenced national crisis.