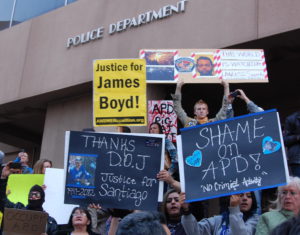 In early March 2014, officers Keith Sandy and Dominique Perez shot and killed James Boyd, a mentally ill homeless man who had the non-emergency police called upon him for “illegally” camping in the foothills of the Sandia Mountains. The police department sent a score of heavily armed officers and SWAT units that appeared ready for a riot. After a stand-off with the police that lasted several hours, Boyd was finally surrendering to police when Sandy and Perez opened fire, killing him with several rifle rounds. The video, caught on the officers’ helmet cams, shows the incident.

Just a few days after the release of the police footage, the Albuquerque branch of the ANSWER Coalition held one of the largest protests in Albuquerque’s recent history. The ANSWER Coalition and members of  the Party for Socialism have been actively fighting against police brutality for years.

Boyd’s family confirmed that he suffered from paranoid schizophrenia. The officers used this as a justification for his murder, stating that his behavior made them “fear for their lives.” 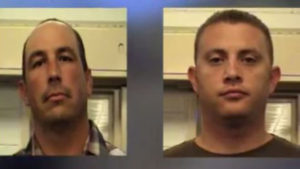 Sandy and Perez were tried for second-degree murder in October of this year; Sandy was also tried for aggravated battery. The trial ended in a hung jury, yet again sparking outrage from the community. Perez has now been officially acquitted of murder, despite the overwhelming evidence that has proven him guilty. The same will likely be true for Sandy.

New Mexico currently ranks as both the poorest state in the nation and the state with the highest rate of police violence per capita. These two characteristics are not a mere coincidence; in fact, police brutality and poverty go hand-in-hand.

When police kill an individual, that person is always a member of the working class. We have yet to see for an officer to pull over a well-known celebrity or Wall Street banker and shoot them in cold blood. Jails and prisons are filled with poor people and disproportionately with people of color. The vast majority of those incarcerated are there for drug possession or socioeconomic-related crimes – while many are not even guilty of the crime of which they are accused.

However, while the poor are imprisoned en masse and deemed “a danger to society,” CEO’s of the big oil and fracking industries will never worry about facing a single day in jail, despite having committed crimes against humanity such as polluting the natural resources and violating Native sovereignty. Government officials who repeatedly steal tax money and further the agendas of corporate lobbyists will never face trial for their massive theft, while the prisons are filled with perpetrators of petty theft.

These patterns demonstrate that the laws in capitalist society aren’t designed to protect the people, but rather to protect the private property of the rich and control the workers. The pattern of police brutality across the country shows that the police merely exist to enforce the interests of the elite, by violence, if necessary. That is why homeless individuals such as James Boyd can be executed for basically having no money, no access to mental health care, or any place to go, while the rich can freely steal wealth, resources and land from the people without facing repercussions.

The result of the two-year controversy of the Sandy-Perez trial merely reflects that the police, the enforcing hand of the elite, can kill people with impunity, even if it is “illegal” for them to do so on paper. Due to the constant organization efforts of the ANSWER Coalition and their allies, the U.S. Department of Justice had already been investigating the Albuquerque Police Department for years when Boyd was murdered. Hundreds of reforms have been demanded, most of which were never enforced.

Police brutality cannot be reformed out of the system. State violence is necessary to enforce the hierarchy of the haves over have-nots. It is only through a people’s revolution and a complete overthrow of the capitalist state that an unarmed police force aimed at deescalating situations and protecting the people, rather than protecting the property and profits of the ruling class, could ever be achieved.