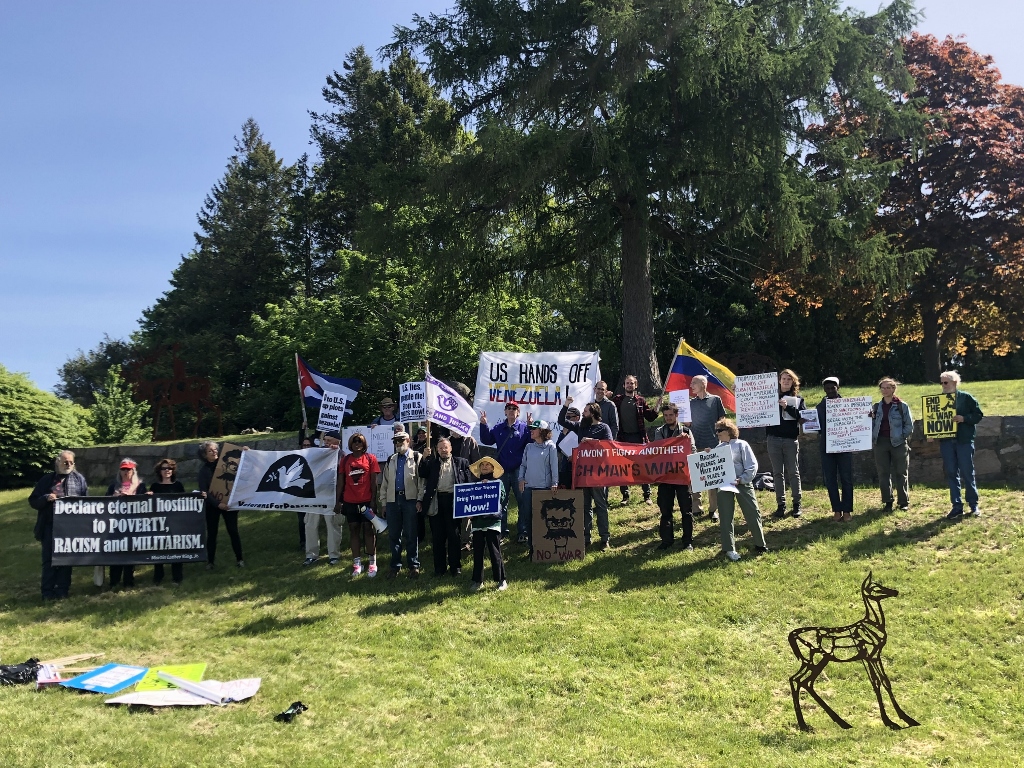 Dozens of anti-war activists gathered outside of the U.S. Coast Guard Academy in New London, Connecticut on May 22 to protest commencement speaker John Bolton. Since returning to the White House as Trump’s National Security Advisor, Bolton has been unabashed in his campaign to launch new wars against Iran, North Korea, and now Venezuela. He has been the lead U.S. voice for the failed effort at ousting Venezuelan President Nicolás Maduro, and seeks further military intervention to prop up Juan Guaidó as Washington’s latest puppet dictator.

Referring to Bolton’s speech to the recent graduates, ANSWER Coalition (Act Now to Stop War and End Racism) speaker Karleigh Chardonnay Merlot started the event by outlining Bolton’s history of lying to further his war agenda. “John Bolton,” began Merlot, “is going to tell these young people that preemption is peace. We have seen the results of John Bolton’s preemption. We saw it in Iraq. We saw it in Afghanistan. We’re seeing it now in Venezuela.”

Bolton is far from the first warmonger to give the commencement speech at the Coast Guard Academy in recent years, with large scale protests greeting both President Bush in 2007 and PresidentTrump in 2017 as well as Vice President Mike Pence last year. As at those past events, protest speakers were quick to point out all of the costs of U. S. imperialism.

Henry Lowendorf from the Greater New Haven Peace Council lambasted Bolton’s repeated use of the outdated Monroe Doctrine in his continued push for the use of more force and sanctions in Venezuela. “We have to be very clear,” announced Lowendorf, “that wars for regime change have to stop.” Lowendorf also stressed how the so-called war economy was costing the people in United States at every level of the economy. “People need jobs, they need afford[able] housing, they need healthcare. We can not do that as long as we are spending $1.2 trillion a year on weapons and war.”

“I bought a billion dollar ad campaign telling me that I was going to go liberate the people of Iraq,” said Fred Linck of the Connecticut Peace and Solidarity Coalition. However, Linck found a different war waiting for him: “We went there and we killed almost a million Iraqis. We have 6,000 U.S. soldiers, Airmen, Marines, and sailors that died in that war. We have 78,000 veterans [who]have committed suicide since 2001.”

As the commencement ended, the protesters joined in anti-war chants and again called for U.S. hands out of Venezuela, Iran, and other sovereign nations.