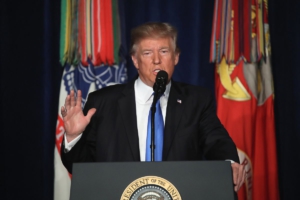 On the evening of August 21, President Donald Trump spoke on national television to lay out his plan regarding the ongoing, brutal U.S. occupation in Afghanistan that has lasted for nearly 16 years.

Of course, before Trump got to discussing the war, he paid lip service to the need to set aside prejudice and transcend all differences. After all, “[L]ove for America requires love for all of its people.” For such words to come from the mouth of someone who has said so many demeaning things about immigrants, women, the disabled and so many other groups of people, in a time of emboldened right-wing and fascist attacks–it boggles the mind!

Prior to this speech, there was speculation about whether there would be an escalation of the U.S. troop presence in the country. While Trump made it clear that there would be an additional deployment, he wiped all semblance of transparency from the process. “We will not talk about numbers of troops or our plans for further military activities. Conditions on the ground, not arbitrary timetables, will guide our strategy from now on,” Trump said.

Then, he proposed billions more for military and arms production as well as expanding the nuclear arsenal. Trump announced the lifting of “restrictions” on the Secretary of Defense, commanders in the field and front-line soldiers to carry out military operations as they see fit.

There are already at the very minimum 40 Afghans dying every day. This past April, the 21,600-pound “Mother of All Bombs” was dropped on Afghanistan. Now that it can be more fully concealed, what greater devastation is to be wreaked on a country that has seen U.S. intervention for nearly 40 years?

Trump proclaimed: “We are a partner and a friend, but we will not dictate to the Afghan people how to live or how to govern their own complex society.” We need only look at the decades of aggression against Cuba, the Soviet Union and the Democratic People’s Republic of Korea (North Korea) to know how the United States really feels about letting people decide their government for themselves. Or look at the covert interventions and assassinations throughout Latin America last century. Or we can look at the demonization and military campaigns to bring down Syria’s Bashar al-Assad and Libya’s Muammar Gaddafi.

The United States is a capitalist country ruled by a tiny elite whose foreign policy is to create a subservient world to line their pockets with more money. The U.S. ruling class saw Afghanistan experience a socialist revolution in April 1978. In response, the U.S. government supported the remnants feudal landlords and extreme right wing religious groups to terrorize the people.

Contrary to every president who has claimed they can bomb “terrorism” out of existence, it is the torture, drones, sanctions and occupations that give rise to it in the first place. They in fact give Wall Street the opportunity to make massive profits off of weapons production, resource exploitation and economic dependence.

It is imperative that we reject this dangerous escalation of the war. Close all foreign U.S. bases and bring all the troops home! Slash the Pentagon budget, and use the money to provide social services, build infrastructure and homes, and provide reparations to the many places devastated by war as they rebuild!