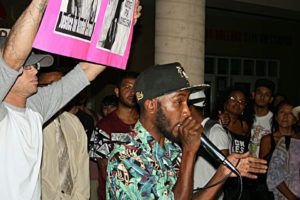 Following two horrific and nationally prominent racist killings of Black men by police, hundreds of diverse Albuquerque residents came out to protest and mourn the deaths of Alton Sterling and Philando Castile on July 7. Demonstrators gathered outside of the University of New Mexico bookstore, right next to busy Central Avenue, for freestyle rap, speak-outs and protesting along the street.

Many of those who attended and spoke were young high school and college-aged people. These youths presented many revolutionary speeches, songs and raps to the crowd about oppression and police violence.

Outspoken and well-known local activist Shakir Farid Abdullah commented on the importance of the rally. “The main purpose was the introduction of new, revolutionary minds of Black men and women in Albuquerque. It’s their time and they’re getting ready.”

“It was the largest turnout of Black people in Albuquerque I’ve ever seen, standing together for a cause,” Abdullah added. “I also saw Natives, Latinxs, and other communities standing with them, those who understand the depths of intersectionality in oppression.”

Speakers expressed their anguish at watching the same narrative over and over – innocent Black man slain by police, system justifies murder, killer police do not receive justice – a narrative all too familiar for every oppressed people. However, the speakers also had another message for the people. They condemned the “insipid prayers and wishful thinking” too often expressed in both the mass and social medias. Rather, they demanded that the people organize, take to the streets, revolt and call for justice.

The militancy of the Albuquerque community was demonstrated when protesters seized and occupied the intersection of Central Avenue and Cornell, where they stalled traffic to communicate their message. Amazingly, several drivers waiting in the traffic got out of their vehicles and joined the protesters in the street, helping to demand justice.

The massive protests across the country in response to the murders of Sterling and Castile show that people are ready for radical reformation, one that can never come under a capitalist state that exists to bring wealth to a select few at the expense of the masses. In a socialist state, society is classless and wealth is distributed equally, therefore eliminating the need of the wealthy few to protect their property through violent suppression of the masses. Racism and capitalism go hand in hand, and in the words of the revolutionary people, “Enough is enough!”