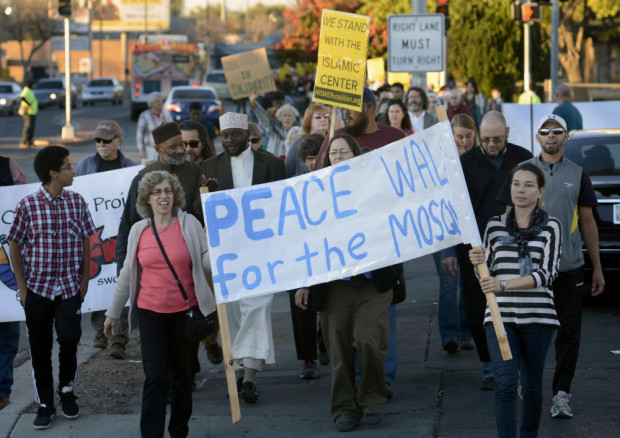 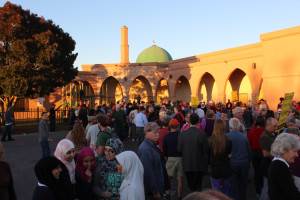 Early in the morning on Friday, October 25 the Islamic Center of New Mexico, a meeting place for up to 2,000 members of Albuquerque’s Muslim community, was attacked by a racist vigilante who attempted to burn the mosque down with a Molotov cocktail incendiary device. No one was injured.

The notoriously racist Albuquerque Police Department have outrageously not called this attempt to burn down an Albuquerque mosque a hate crime.

However, five days later, on Oct. 30, the people of Albuquerque responded! Over 300 people of all different faiths and backgrounds marched in a “Peace Walk” to the Islamic Center in an emotional display of support and solidarity.

Members of the Islamic Center organized a reception for the peace walkers. Imam Shafi Abdul Aziz and Abdul Rahman Emawy, President of the ICNM, expressed surprise and gratitude at the large turnout. Their message was simple: in the face of 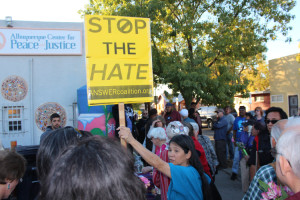 violence, bigotry and ignorance, “We are one!”

Sally McMillan, a local activist with the United Nations Association Albuquerque Chapter, read from a solidarity statement signed onto by the Albuquerque Peace and Justice Center, Jewish Voices for Peace, Stop the War Machine, Stop 30 Billion to Israel, and the ANSWER Coalition: “We deplore the prejudices prevalent in our society that lead to such hateful acts, and we pledge to do our best to confront violence and the misconceptions that lead to violence.”

The arson attempt is only the latest in a string of bigoted assaults on members of the Albuquerque Muslim community.

Imam Shafi, who leads prayers at the ICNM, recounted several other incidents to the Albuquerque Journal: “… [A] couple of years ago, a man came through the open door of his office brandishing some kind of sharp object and shouting abusive insults at him. In another case, a man with a knife jumped over the property fence from the 7-Eleven store on the north side of the mosque complex and threatened some teens who were playing basketball. About a year ago, someone threw a partially burned copy of the Koran, the Muslim holy book, into the parking lot.”

Violence directed toward Muslims is fueled by the corporate media demonization of Muslim people. Racist bigots like TV-show host Bill Maher can openly bash Muslims nightly, to the detriment of Muslim Americans, without fear that he will ever lose his job.

Hatemongering and the spread of racist hysteria against Muslims continues to be used by the U.S. government to justify military conquests in the Middle East.  Syria is the seventh predominantly Muslim country that the Obama administration has bombed, after Afghanistan, Pakistan, Yemen, Somalia, Libya, and Iraq.

It is critical for progressives and revolutionaries to respond immediately in the face racism and bigotry.

Albuquerque residents rose in the hundreds in solidarity, showing the bigots that their hatred is not welcome!