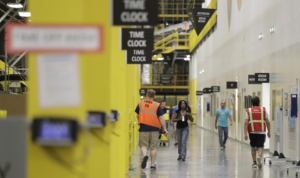 On Feb. 1, Amazon reported its highest ever quarterly profit, bringing in $1.9 billion in profit in the fourth quarter of 2017. The news came a day after it was reported that Amazon had patented wristbands that would track warehouse workers’ movements while they were on the job. The stunning contrast between these two stories reinforces the fact that Amazon’s massive profits are created by the work of mostly low-paid warehouse workers and delivery drivers who work under slave-like conditions.

Amazon’s quarterly report revealed that the company made $1 billion more than over the same period in 2016. Of that $1.9 billion profit, $789 million was because of the tax “reforms” passed last year. The report also showed that Amazon hired almost 130,000 more employees around the world in 2017, which brought the company’s total workforce to 566,000 people. That number excludes contractors that make up a large share of Amazon’s workforce. These workers are the reason for Amazon’s wealth, not the supposed genius of CEO Jeff Bezos.

Amazon’s patent for a wristband that will track workers’ movements garnered attention because of the company’s history of abusive labor practices and the creepiness of the concept. The wristbands have a variety of potential uses, for example, vibrating if a worker is about to put an item in a wrong bin or tracking workers’ job performance. Much of the commentary about the wristband focused on how it can be used to control workers.

As a company, Amazon is simply too powerful and must be dismantled. Under capitalism, the scientific and technological advancements made are being used to squeeze every last ounce of profit out of workers. We must liberate the productive forces of society from the capitalists in order to benefit the many, instead of continuing on the current trend of the vast majority being driven into the abyss of slave-like low-wage labor.

Amazon was disturbed enough by the coverage to release statements to multiple media outlets, stating: “The speculation about this patent is misguided. Every day at companies around the world, employees use handheld scanners to check inventory and fulfill orders. This idea, if implemented in the future, would improve the process for our fulfillment associates. By moving equipment to associates’ wrists, we could free up their hands from scanners and their eyes from computer screens. Like most companies, we have performance expectations for every Amazon employee and we measure actual performance against those expectations, and they are not designed to track employees or limit their abilities to take breaks.”

Amazon promotes the device as a way to cut down on time consuming acts like scanning or checking computer screens, and dismisses concerns about the wristbands being used for control. Even if Amazon’s statement is taken at its word, under capitalism, labor saving technology is rarely developed for the benefit of the workers using it. The time warehouse workers previously spent looking at screens will be spent doing other more profitable tasks. If the technology is successful enough for Amazon, then warehouse workers may be laid off as there is not enough work for them. It is well documented how Amazon already closely tracks employees and limits breaks.

However, Amazon is correct in stating that most companies do these things. What makes Amazon unique is how ruthlessly it pursues increased efficiency at the expense of its workers. This ruthlessness is rewarded by capitalism and has enriched people like Jeff Bezos. This attitude has allowed Amazon to become one of the most important corporations in the global economy.

As Amazon moves forward with its HQ2 competition, which is now down to 20 cities, it is important to remember how Amazon has been built on the back of workers. Amazon promises to bring jobs to whatever city it chooses, but it is a workplace few of its current workers would choose if they had other options. It is also important to note that Amazon is not uniquely evil, but is following the profit or else rules set down by capitalism.