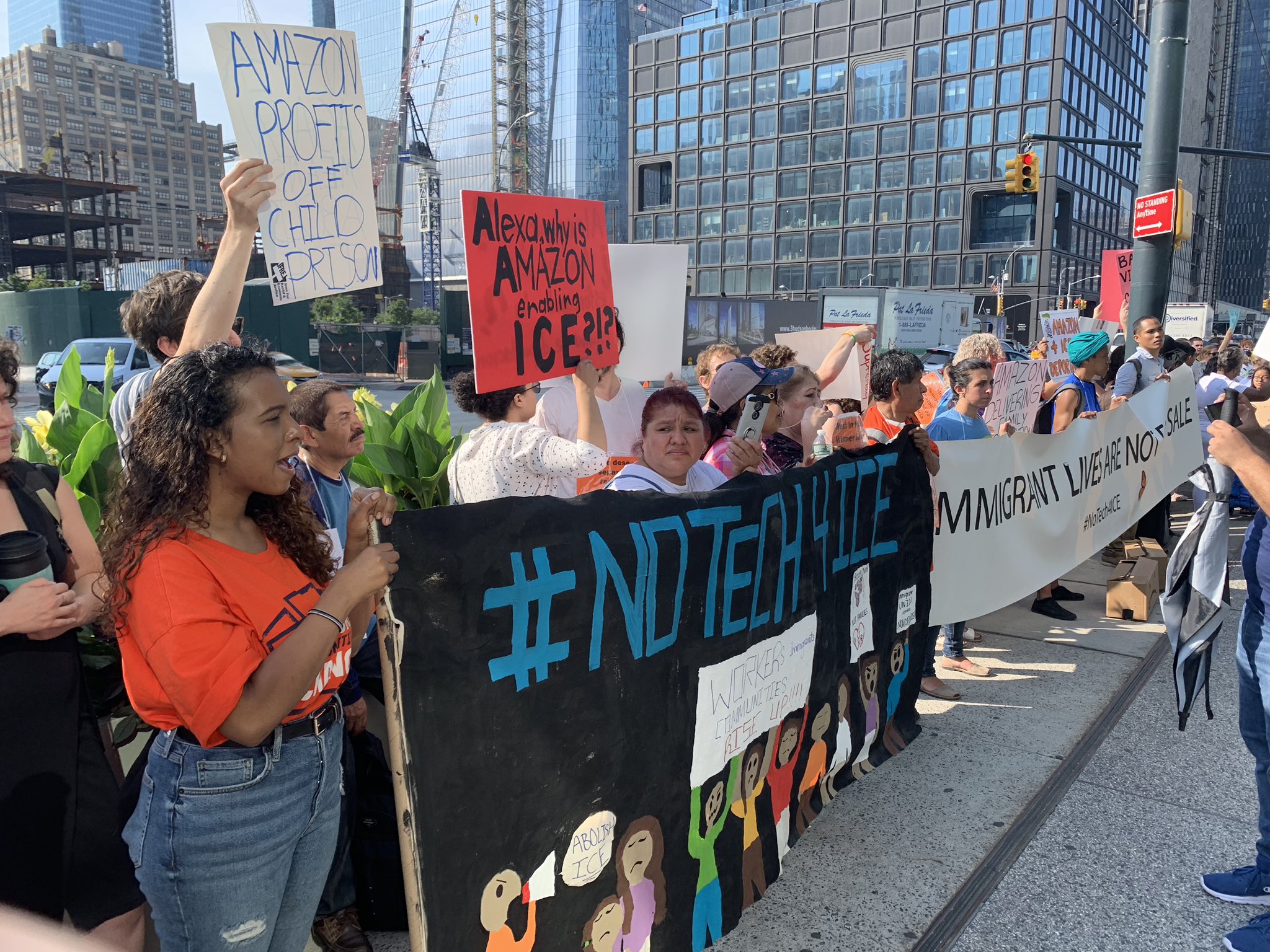 Amazon Inc.’s Prime Day is billed as a huge sale on the site, featuring discounted goods and significant promotions for customers who subscribe to Amazon’s Prime service. The company claims that Prime Day is even bigger than Black Friday, the day after Thanksgiving when retailers traditionally offer significant discounts to kick off the December holiday shopping season. This year’s Prime Day, which lasted two days on July 15 and 16, featured 40-50 percent discounts on clothes, shoes, electronics, home furnishings and more and was kicked off with a concert featuring Taylor Swift, SZA and others. The company sees Prime Day as a way to encourage people to sign up for its Amazon Prime service and then to spend significant amounts of money on its goods — in the end, creating greater and greater profit for Amazon and billionaire CEO Jeff Bezos. Bezos, the world’s richest person, says that Prime Day gives “shoppers plenty of reasons to come back again and again.”

On Prime Day 2019, workers fought back against Amazon’s corporate greed and criminal treatment of its workers, building on their 2018 actions. Workers across the United States and the world staged labor actions. In Germany, 2,000 Amazon workers at seven Amazon locations are on strike during Prime Day, while the UK will see protest actions against Amazon all week. Workers in Spain and Poland will also take action against the company.

A protest was also held on July 15 in New York City, where activists delivered 250,000 petitions to Jeff Bezos’ penthouse apartment demanding Amazon end its partnership with ICE. Other protests at Amazon buildings were also held in San Francisco and Seattle.

In the United States, where Amazon has 300,000 workers — nearly half of its global 630,000 workforce — much of the action focused on the Amazon warehouse in Shakopee, Minnesota. There, workers walked out at 2 PM each day for a 6-hour strike that impacted both the morning and evening shifts. On July 15, they chanted “Amazon, hear our voice!” and “We work, we sweat, Amazon workers need a rest!” That chant is directly challenging Amazon’s labor practices in its warehouses, where workers are pushed to their limits to meet Amazon’s demands. William Stolz, who works at the Shakopee warehouse, has to pick an item about every eight seconds over a 10-hour shift. “The speeds that we have to work are very physically and mentally exhausting, in some cases leading to injuries,” he told the BBC, continuing that “Basically we just want them to treat us with respect as human beings and not treat us like machines.”

Some 74 percent of Amazon warehouse workers in Staffordshire, UK have reported having to urinate in bottles instead of taking bathroom breaks in order to keep up with the company’s demands on them for fear of being disciplined and losing pay or their jobs. Amazon counts breaks against a worker’s productivity. 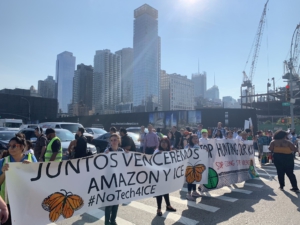 Amazon workers have already won victories through action and struggle. In October of 2018, Amazon announced that it would pay all workers in the United States at least $15/hour within a month. The $15/hour demand was part of the 2018 Prime Day protests by workers. In Minnesota, a majority of Amazon employees are East African, primarily Somali immigrants. They partnered with the Awood Center and CAIR to win more fair scheduling around the Muslim holiday of Ramadan and for Amazon to install a prayer room in the warehouse.

In solidarity, many people have heeded a call for a boycott of Amazon over Prime Day, citing the treatment of warehouse workers and the troubling role that the company plays in the military-industrial complex.

Amazon is actively promoting its Rekognition facial recognition system to ICE and other federal agencies, as well as to local law enforcement. It also provides hosting services through its Amazon Web Services division to Palantir, a company that provides tracking and analytics services to ICE. The company is also in a bidding war against tech giants Microsoft and Oracle for a $10 billion “war cloud” service formerly called the “Joint Enterprise Defense Infrastructure” or JEDI. In addition, Amazon already hosts a $600 million private server infrastructure for the Central Intelligence Agency.

Solidarity between tech workers — those who write the software and manage the hardware that powers all of Amazon’s services — warehouse workers and those targeted by the law enforcement and intelligence agencies that Amazon supports is critical at this moment. In 2018, more than 500 Amazon employees signed on to a “Dear Jeff” letter addressed to Jeff Bezos and Andy Jassy, the head of the Amazon Web Services Division. In the letter, the workers call out Amazon’s selling of Rekognition to police departments, acknowledging that “in the midst of historic militarization of police, renewed targeting of Black activists, and the growth of the federal deportation force currently engaged in human rights abuses —this will be another powerful tool for the surveillance state, and ultimately serve to harm the most marginalized.”

The letter further goes on to say, “In the face of this immoral U.S. policy, and the U.S.’s increasingly inhumane treatment of refugees and immigrants beyond this specific policy, we are deeply concerned that Amazon is implicated, providing infrastructure and services that enable ICE and DHS.” The letter ends with three demands: That Amazon stop selling Rekognition to law enforcement; that it stop providing services to Palantir and any others working with ICE; and that the company implement transparency and accountability measures regarding its collaboration with law enforcement agencies.

The advanced technologies that Amazon makes billions of dollars selling to oppressive agencies could be used for good. Machine learning and artificial intelligence could help a government focused on the needs of the people to identify, for example, a trend of illnesses in an area and respond quickly. The vast processing and storage power at Amazon alone could be used to power a planned economy and monitor and model economic, social and environmental trends. Under capitalism, these technologies are sold to the highest bidder — in many cases private companies and government agencies that are complicit in or directly involved in environmental destruction, anti-worker activities and economic and political oppression.

Through a united struggle based on solidarity and common interests, Amazon workers from all areas of the company can partner to get justice in their workplace, and that same solidarity across all workers and oppressed people will ultimately lead to a new system — socialism — where the vast wealth and resources of companies like Amazon will be used to benefit us instead of oppress us.