“The Portuguese stand out because they boasted the most and did the least. After close to half a thousand years not a single medical doctor had been trained in Portuguese Mozambique. As for Guinea Bissau, Portugal confessed open neglect of this territory.”

Amilcar Cabral was born in Bafatá, Guinea Bissau, to Cape Verdean parents in 1924. He was the son of Juvenal Lopez Cabral, a schoolteacher and anti-colonial activist, and Iva Pinhel Evora, a seamstress and laborer in a fish supplying factory. At the age of eight, his family moved back to the Cape Verdean Islands, where he excelled as a student and poet. There were several droughts in Cape Verde in the 1940s leading to the deaths of over 50,000 people from starvation. The impact of the drought was felt even more sharply because of Portugal’s indifference to the suffering and starvation. The contradictions of colonial rule across Africa inspired the 20-year-old Cabral to vow to wage a life and death struggle to free his people from the yoke of foreign domination.

The Portuguese empire offered a few scholarships to students from the colonies in hopes of co-opting and training them to be future functionaries of the Portuguese colonial government. Because of his exemplary intelligence, in 1945, Cabral received a scholarship to study in the colonial center of Lisbon, where he came into contact with other African students from the Portuguese colonies of Angola, Sao Tome e Principe, and Mozambique. His arrival in Europe at the close of World War II coincided with a new stage of struggle throughout Africa, the Middle East and Asia. In country after country, colonized populations began to demand independence. Even the intellectuals who had been trained in Europe and traditionally argued that colonialism brought “progress” began to assert otherwise.

Interacting with his counterparts from British and French colonies in Africa, Cabral formed the African Studies Center in 1948 in Lisbon. He worked closely with Augustinho Neto, the future leader of Angola’s liberation struggle, and Eduardo Mondlane, first president of FRELIMO (the Liberation Front of Mozambique) in an underground study group to discuss political theory, including Marxism, and solutions to the African colonial question. Trained as an agronomist, Cabral returned to Guinea. He traveled the countryside to study his country’s soil topography and crop production, generating the first and best scholarly study on the topic.

His travels throughout Bissau and Angola familiarized him even more with the psychological and economic features of colonialism and the cultural life of his people. For instance, he realized that some of the conventional demands of the left towards the peasantry—such as land reform—were not the most pressing; in the Guinean countryside, small private landholdings were already common. Instead, peasants experienced the burdens of colonialism most heavily through their interactions with Portuguese merchants: their exploitative trade rates, insistence on single-crop production and daily personal humiliations. These experiences would have a profound influence in his writings and outlook on how to defeat Portuguese rule in Africa.

Though Cape Verde is a series of islands 500 miles off the coast of Africa, the nations of Cape Verde and Guinea share a similar history. The Portuguese rulers sought to divide the two nations by favoring the Cape Verdeans, who were thought to be lighter-skinned than the Guineans. Cabral saw the destiny of the two nations as inseparable and in 1956 formed the African Party for Independence (PAI) (which would later become the African Party for the Independence of Guinea and Cape Verde (PAIGC)) and declared open armed struggle as the way forward.

National liberation and the ‘road of socialism’

Cabral was part of a trend in the worldwide anti-colonial movement that, drawing inspiration from the Chinese and Vietnamese examples, argued for the supremacy of the urban and rural masses in national liberation struggles. Cabral believed revolutionary socialism was the only genuine solution for colonized peoples: “In our present historical condition, there are only two possible paths for an independent nation, to return to imperialist domination (neo-colonialism, capitalism, state capitalism), or to take the road of socialism.”

Cabral divided history into three epochs related directly to the development of the means of production: society before classes (of which he called for more study), class society, and a future communist society in which private property and class divisions would be eliminated. Guinean pre-class society had already given way to class divisions prior to Portuguese colonialism, but the latter had stunted the colonies’ economic and cultural development. The objective for Cabral was to seize the national productive forces, further develop them and utilize them for the common good. He argued that only mass, popular resistance—not just negotiation conducted by a small stratum of intellectuals—could ever be successful in truly completing these tasks.

Guinea, as a super-exploited colony, had a small urban working class and Cabral looked to the peasantry as the social force capable of defeating the Portuguese. He emphasized the unreliable nature of the native bourgeoisie, which developed as a service class for colonialism. He warned that they would seek to inherit the state apparatus and continue to siphon off the wealth of the nation to imperialism as long as they received their share. “If we accept the principle that the liberation struggle is a revolution and that it does not finish at the moment when the national flag is raised and the national anthem played.” Instead, “we are fighting so that insults may no longer rule our countries, martyred and scorned for centuries, so that our peoples may never more be exploited by imperialists not only by people with white skin, because we do not confuse exploitation or exploiters with the color of men’s skins; we do not want any exploitation in our countries, not even by black people.” 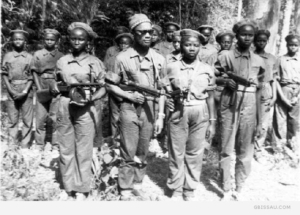 Cabral training a squadron of guerrillas in Guinea.

Cabral directly addressed intellectuals and called on them to abandon their loyalty to other class interests and the agents of imperialism. Instead, the role of the revolutionary intellectual was to march shoulder-to-shoulder with the most oppressed sectors of society. The latter were the only social force truly capable of carrying out a social revolution. (“Return to the Source,” 1974)

In the process of struggle, guerrilla leaders would undergo “a reafricanization of the spirit.” In short, this meant that picking up arms against the colonial rulers would puncture the mythology of the latter’s “greatness and invincibility” and restore African people’s identity, dignity and self-determination.

In his famous “The Weapon of Theory” address at the 1966 Tricontinental Congress in Havana, Cabral expressed the desire and determination to emulate the Cuban people’s example of overthrowing all forms of exploitation through armed struggle. Like Che Guevara, Cabral emphasized the human dimension of the liberation struggle, hoping that out of the struggle for a new society, a new man and new woman would develop elevated beyond egotism and self-interest.

Maria da Luz “Lilica” Boal, an original combatant with Cabral who oversaw the school for children in the liberated territories in the late 1960s and early 1970s, described to Liberation the character of his leadership. She recalled how Cabral checked in at the school every morning gently adjusting the children’s school uniforms and having a laugh with them before he left to oversee the ideological and political training of the PAIGC cadre.

Undoubtedly familiar with Lenin and the general line of the Communist International in the wake of World War I, Cabral also viewed national liberation as part of a worldwide struggle against capitalism in its imperialist stage. In 1970, Cabral visited Alma Ata, the capital of the Soviet Socialist Republic of Kazakhstan, for a conference on oppressed nation’s self-determination. Cabral called Lenin “the greatest champion of the national liberation of the peoples.”

In fascist Portugal, all references to Marxism and class struggle were punishable by imprisonment, torture and even execution. It was in Africa that many conscripted Portuguese soldiers, of rural and working-class backgrounds, first came into contact with ideas about democracy and socialism. The steadfast resistance and determination of the peoples of Cape Verde and Bissau wore down the conscripted Portuguese army and emboldened them to rebel against their commanding officers in 1974.

Thirteen years of war against the African liberation movements had moreover over-extended the Portuguese military and become a burden on the economy. In an interview with Portuguese poet and politician Manuel Alegre, Cabral spoke directly to the 20,000 Portuguese conscripts urging them to consider their class interests above and beyond the national chauvinism their ruling class fed them. Portuguese officers began to refuse orders on African battlefields, and formed an Armed Forces Movement (MFA) that supported the demand for independence. In today’s terms, this would be equivalent to the rank-and-file of the U.S. military declaring their solidarity with the Iraqi resistance—imagine the impact!

The MFA led a rebellion against fascism at home, which ended more than 40 years of rule under António de Oliveira Salazar and Marcelo Caetano. It opened the door to a popular upsurge that nearly claimed power for the Portuguese workers. These social convulsions in the imperial center in turn facilitated the independence of Portugal’s African colonies. Each wave of revolution builds on and draws from the victories of the past. Just as the Cuban revolution received invaluable support from the Soviet Union, the national liberation struggles in Guinea and other colonies likewise received invaluable assistance from the Cubans, who sent an international mission under the leadership of Victor Drake to train PAIGC cadre.

The PIDE—the Portuguese secret police—functioned both at home and in the colonies to harass, jail and squelch all resistance against the ruling junta. They had Cabral killed on Jan. 20, 1973. It was only a few months before the victory of his people over Portuguese colonialism and the declaration of the independence of Guinea-Bissau and Cape Verde.

Cabral is only one in a long list of African revolutionaries and visionary leaders assassinated by the colonialists and their junior partners. That list includes Eduardo Mondlane of Mozambique (killed by a PIDE letter bomb in 1969), Félix-Roland Moumié (a Marxist Cameroonian leader murdered by French intelligence in 1960), Patrice Lumumba of the Congo, Thomas Sankara of Burkina Faso, Chris Hani of South Africa and many other unknown leaders. These figures, and the movements they led, contrast sharply with all of the racist, bourgeois clichés about corrupt, inefficient, vainglorious, tribal African leadership and failed states. Instead of inter-ethnic conflict and the enrichment of a tiny elite, they projected broad African unity, premised on the public ownership of the continent’s vast resources. This vision—which cut to the very heart of imperialist control—remains potent, ready to be picked up and expanded by the next generation of African revolutionaries. From Tunisia to South Africa, and everywhere in between, the stage is set for a new era of class and anti-imperialist struggles. Amilcar Cabral’s legacy and thought remains valuable today.