On the anniversary of the police murder of Akai Gurley, hundreds gather to protest 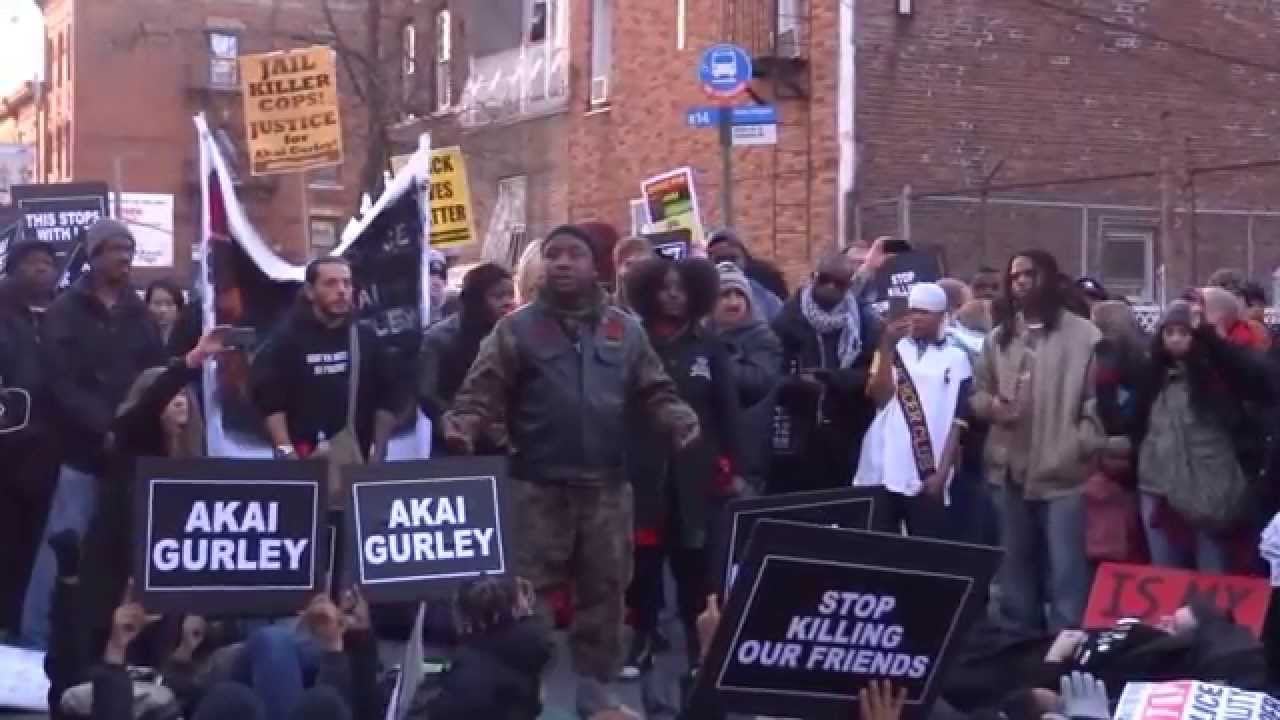 One year after the NYPD’s senseless murder of Akai Gurley – an unarmed 28-year-old Black man in East New York, Brooklyn – his family joined together with neighbors from the community and activists from around New York City to march against racist police violence and to demand justice for Akai.

Despite the cold weather, over 200 people gathered in front of the Pink Houses, the public housing development where Akai Gurley lived. Kerbie Joseph, an activist with the ANSWER Coalition, emceed as family members of Akai Gurley and others took turns to speak about the need to end police violence and to get justice for Akai Gurley. Kerbie addressed the crowd of protesters, saying,

“Police brutality is an epidemic that occurs every 28 hours in this country, and this system protects the police that continue to murder people in the most oppressed communities.  We will continue to fight and put pressure on the police department, on the politicians, and justice system, but only a new system will end police brutality completely.  Malcolm X said it best: ‘You can’t have capitalism without racism.'”

Among the family members present at the demonstration – some traveled all the way from Florida to attend – Akai Gurley’s aunt, Hertencia Petersen, spoke with Liberation News.

“I’m overwhelmed by the turn out tonight. I see that there is a lot of people that care for my nephew and didn’t even know him – because of the situation, because of the case, and because people are just tired of the injustice that’s been happening.”

Using the “mic check” style of call-and-response popularized during the Occupy movement, people shouted out the brutal facts of yet another NYPD murder. Due to a broken elevator in the building, Akai and his girlfriend decided to walk down the stairs from the seventh floor. The lights in the stairwell were also broken. Two police officers, Shaun Landau and Peter Liang, were conducting a vertical patrol in the building. Officer Liang had his gun cocked and loaded with his finger on the trigger. Startled by a noise, he fired into the stairwell, striking Akai Gurley in the chest.

Instead of calling emergency services, Officer Liang called his police union representative, remaining on the phone for six and a half minutes, while Akai Gurley lay gravely injured. Then, rather than attend to him, Officers Landau and Liang debated reporting the incident to their superiors. At no time did they attempt to administer first aid to Akai Gurley or to resuscitate him or even call for an ambulance. Officer Landau is avoiding charges in exchange for his testimony against Officer Liang. As a result, Officer Landau can never be charged in relation to Akai Gurley’s death, and he remains employed as an officer of the NYPD.

“You said it’s an accident, so why did you not stop to administer CPR or apply pressure to the wound?” Ms. Petersen asked. “You took an innocent life, and now you just don’t want to be held accountable. What if it was one of your nephews, one of your brothers, one of your cousins? Or even your mother? What would you do?”

The NYPD is trying to call Akai Gurley’s death an accident, but Officer Liang’s training, that taught him to be trigger-ready, was no accident. Moreover, a number of systematic factors contribute to the impossibility of calling Akai Gurley’s death an accident. For example, until last year, more than $75 million a year came out of the already-stripped public housing budget to pay the NYPD, basically taxing public housing residents twice for the police to conduct the kind of vertical patrol they were doing when they killed the young father. For twenty years, millions of dollars came out of the public housing budget in order to pay the police – money that should’ve gone to repairs and maintenance. These funds could have fixed the broken elevator that caused Akai Gurley and his girlfriend to decide to walk down from the seventh floor or might have fixed the broken lighting in the stairwell.

Marquis Jenkins of Cop Watch has been actively involved with Akai Gurley’s case since he learned about this case of police terror. He told Liberation News:

“I grew up in public housing, so I know what it’s like to be in your home and be harassed by police officers. Akai Gurley was more than harassed. He was killed in his own home for doing nothing more than deciding to take the staircase as opposed to taking the elevator. So now it’s a hazard to live in public housing. It’s a hazard, and we’re targeted simply because we’re poor. So I’m tired of losing our family members, our loved ones, our friends and our neighbors to the reckless actions of police officers, who come into our home and violate our rights and our culture and our freedom to live.”

Demonstrators marched around the Brooklyn blocks surrounding Pink Houses, leaving the sidewalk in order to take the streets, chanting: “Hands up in the sky, we’re doing this for Akai” and “How do you spell racist? NYPD!” Scaffolding surrounding the buildings showed evidence of further unfinished construction at the public housing development.

Akai Gurley’s death came at a time when the Black Lives Matter movement and uprisings like those in Ferguson for Mike Brown and in Baltimore for Freddie Gray have brought renewed attention to the rampant issues of police violence against Black men and women. In the United States, the police have already killed over 1,000 people in 2015. Victims of police murders are disproportionately Black, and the Black people killed by police are twice as likely to be unarmed – as Akai Gurley was.

“Peter Liang’s mother is worried because he can’t pay his school loans,” Ms. Petersen told Liberation News. “Akai Gurley will never be able to do anything that her son can do.”

The trial to convict Officer Peter Liang and the NYPD will be held on January 7th, 2016. Now is the time to demand justice for Akai Gurley and for all the lives stolen by racist police violence. Contact the ANSWER Coalition to join the struggle against police terror 212-907-7118 http://www.answercoalition.org/.