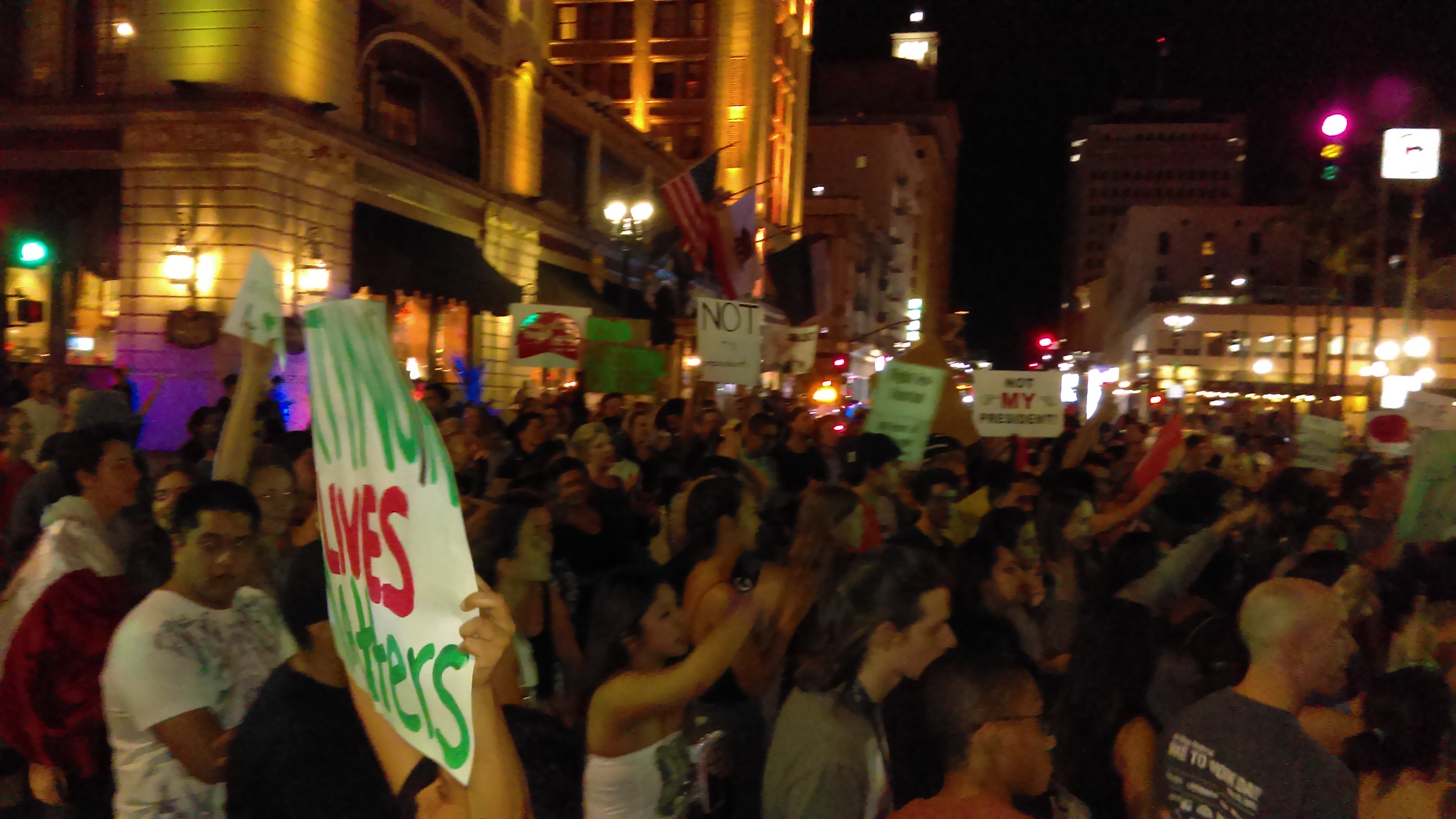 Before the polls even closed on the West Coast, and a Trump victory was imminent, hurried plans for demonstrations and protests began flooding social media. People from all backgrounds, in a state of shock and disbelief, began looking for answers and an organized way to voice their fears and anger. The Act Now to Stop War and End Racism (A.N.S.W.E.R.) Coalition saw the urgency to immediately call for an action to happen the following day.

At 5:00 pm,protesters took over multiple street corners near the Downtown Federal building with their signs and voices expressing their anger and frustration of what a Trump presidency would mean.            While Clinton would have not represented any semblance of a progressive presidency, her defeat by Trump was a harsh wake up call to many. This wake-up call brought all kinds of people to the protests, from disillusioned Hillary supporters to those on the political Left to sectors of marginalized and oppressed groups.

With this broad range of people pouring in to protest Trump, the event quickly grew to spread beyond the street corners and into the streets for a march. The spontaneous march moved through downtown San Diego’s tourist area, passing hotels, bars,restaurants, and shops. The site of hundreds of organized people chanting things like “Whose streets? Our streets!,” “The people united will never be divided,” and “F— Donald Trump” brought traffic to a standstill while local residents and tourists stopped to watch, many of whom joined the march or voiced their support.

Multiple times, the march stopped at a busy intersections and occupied the streets. The march then proceeded to Horton Plaza, downtown San Diego’s large multi-level outdoor mall, and hundreds of protesters moved up and down the various levels, chanting and letting the working people there know there is a mass movement for justice.

From the mall, the march continued to the Metropolitan Correctional Center, a federal detention facility, and heard from representatives of the family of Alfred Olango, who was murdered by police on September 27 in El Cajon. They spoke about their appreciation of the protesters for standing up to racism and a racist politician. Many inmates could be seen listening at their windows and a few even flashed their lights in support.

Initially, there were but a few bicycle cops, but as the numbers grew and protesters began marching in the streets, more and more police began to follow and try to direct the march. As marchers yelled “This is what democracy looks like,” police tried to block protestors in various places. It was apparent that the police were there to protect private property and to minimize disruption to commerce. As the march neared a freeway on-ramp, the police involvement escalated.

Motorcycle cops sped dangerously past the protesters in the street and on the sidewalks to get ahead of and redirect the march. Seven peaceful protesters near the front of the march were arrested at this stand-off, and soon, the whole intersection was lined with cops in riot gear on motorcycles, and in squad cars. The protesters linked arms and chanted “Let them go.”

The march continued but the police blocked off an entire intersection with a line of officers in riot gear armed with nightsticks and zip ties. They ordered the protesters to disperse or face arrest. After a short confrontation, the march reversed direction.

While this was just the first of many such events between now and inauguration day, the apparent energy, the desire to organize and participate, and the sheer number of people who showed up on such short notice demonstrates optimism for future events. Many youth, people of color, Muslims, disillusioned Democrats, and older people had expressed that this was the first protest that they had even considered attending. This presents a unique opportunity for building broad coalitions with progressive groups and to include many more people who had feel the need for action.

A larger demonstration is planned for November 12 at 1pm in Balboa Park near President’s Way. We can no longer tolerate the status quo of the two ruling parties and the “day after” protest was a sign that more people are willing to participate and organize in the struggle for justice.