The polar regions are particularly sensitive to climate change and have seen greater temperature rise than other areas of the globe with Antarctica increasing by 3°C in the last 50 years.

A massive fissure in the Larsen C ice sheet on the Antarctic Peninsula has been increasing by the length of about five football fields each day since December 2016. The crack is creating a huge chunk of ice half the size of Jamaica covering 1,900 square miles and nearly 1,000 feet thick. The rift is likely to break from the ice sheet within the next few months and will become the largest iceberg in history.

The break in the ice sheet itself will not trigger a sea level rise since the ice sheet sits on the ocean surface, but the fear is loss of the glaciers behind the ice sheet. As global air and water temperatures rise, the ice sheet is slowly eaten away causing weaknesses that lead to cracks. Ice sheets act as barriers for the interior glaciers, holding them in place and keeping them from slipping into the ocean and melting.

The loss of the interior West Antarctica glaciers, where Larsen C is located, could lead to as much as a 20-foot global sea level rise. Additionally, a positive feedback loop would be triggered as the loss of this massive area of reflective snow and ice uncovers the darker heat-absorbing water and land beneath, adding to global temperature increases.

We have been writing articles detailing how the climate crisis cannot be solved under capitalism—regardless who is in office—and that only a socialist planned economy based on the needs of society—not production for profit—can save us. But in this moment, as we teeter on the brink of runaway climate change, we are faced with the Trump regime of climate change deniers who, instead of making weak yet incremental advances toward addressing the crisis as Obama did, are attempting to rip off those “bandaids” and turn back the clock. If the new regime has its way, we will return to the time of unregulated industry with acid rain falling from the skies and new oil/fracking wells and pipelines in every back yard (except theirs of course).

Climate change denier Congressman Gary Palmer has introduced a bill “Stopping EPA Overreach Act of 2017” (HR637), backed by 114 other Republicans, that would amend the Clean Air Act and block the EPA from regulating greenhouse gases, such as CO2 and water vapor, which Palmer states “are both essentially harmless and in fact required for life to flourish.”

The outpouring of mass protests since inauguration day is our hope to counter these anti-science-based retrograde policies. Trump cancelled a recent visit to Milwaukee due to the threat of massive protest. He basically can’t leave the White House, but he can still sign all the executive orders he wants from there! 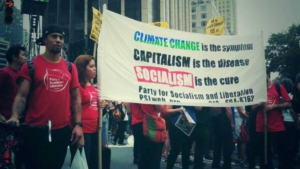 We need to build a sustained mass movement independent of the Democratic Party to win the change we need. From immigrant rights, to women’s rights, to defense of public education and the climate, and all the other progressive gains the Trump regime will attack. We need a #GeneralStrike that shuts down the system that cripples capitalist “business as usual” profits. We need to have all the billionaires shaking in their mansions. And eventually we need to win a socialist system—a system of, by, and for the people.

There are protests for climate action being planned for Earth Day on April 21. We, the people, have the power and the knowledge to save ourselves. But do we have the will? Join us to build for this and the many other protests to come! The time is now. We can no longer sit by and wait for political leaders and the activists to save us. We all need to become activists. We have nothing to lose but our chains. We have a world to win.