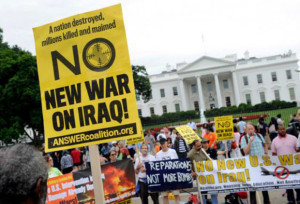 President Obama’s new war plans in Iraq and Syria will not liberate the people of either country but will lead to more destruction. The U.S. military defeat of the secular Iraqi and Libyan governments (in 2003 and 2011) and its policy of fueling armed civil war against the secular, nationalist government in Syria are the fundamental reasons the so-called Islamic State has grown and become strong.

Perpetuating a now 23-year-long U.S. political tradition, President Obama is announcing tonight that he, like the three preceding U.S. presidents, will go forward with another bombing campaign in Iraq. This is a war that will lead only to more catastrophe and destruction.

“We in the ANSWER Coalition oppose this war and we will be organizing mass demonstrations to oppose the bombing of Iraq and Syria. This war, like the earlier ones, is being sold on the basis of misinformation and fear. The United States is a major part of the problem and cannot be the solution to the current crisis in Iraq,” stated Brian Becker, National Coordinator of the ANSWER Coalition.

This Administration and the previous three administrations have each waged war or conducted a bombing campaign in Iraq under a shifting set of public rationales. Each was carried out under the supposed imperative need to protect “U.S. interests” and each was conducted using noble, humanitarian or anti-terrorist slogans.

If one goes by the media headlines this U.S. war too will be for another noble cause — just as the previous wars and bombing campaigns were described when they were conducted by George W. Bush, Bill Clinton, and George H.W. Bush. This time the war will be conducted under the slogan of defeating the heinous so-called Islamic State forces who have come to dominate predominantly Sunni communities in northern and western Iraq.

The U.S. military cannot solve, but only exacerbate, the current crisis in Iraq and Syria. In fact, the U.S. government, the CIA and the Pentagon are responsible for the disintegration of Iraq and Syria and the consequent rise of the Islamic State and other equally reactionary, sectarian forces in Iraq’s central government and elsewhere in these countries.

The so-called Islamic State did not exist a decade ago. It exists now and has grown strong for three basic reasons each of which is a direct consequence of U.S. policies and actions in Iraq, Libya and Syria.

The United States invasion in 2003 destroyed the unitary secular government of Iraq and then followed it up by outlawing the Baathist political party, disbanded the national Baathist-led Iraqi army, and then, as an occupation strategy, hand picked Iraqi Prime Minister Nour al-Maliki whose government pursued a sectarian policy of terrorizing Sunni communities.

The United States and its NATO partners smashed the secular, nationalist Libyan government through a massive bombing campaign in 2011. This war of aggression fractured Libya as a unitary state, similar to what happened in Iraq, and led to the seizure of vast tracts of territory and heavy weapons by jihadist militias. These weapons and many fighters quickly migrated to join the war supported by the United States and its regional allies against the secular nationalist government in Syria.

The Islamic State in Syria acquired vast quantities of heavy weapons and funds since 2011 as part of the armed opposition in Syria. Official U.S. policy was to support the armed struggle against the secular Syrian government. The armed opposition groups, including the Islamic State, received weapons and funds from a coalition of countries that included the United States, Turkey, Saudi Arabia and Qatar.

The U.S. government is also planning to use the current crisis to directly intervene militarily in Syria. The real goal in Syria will be to militarily defeat the Assad government. The armed rebel groups in Syria – including the Islamic State – have shown that they cannot defeat the Syrian army without the direct military intervention of the United States. Any military intervention by the United States in Syria without the consent of the Syrian government is a violation of international law and the UN Charter.