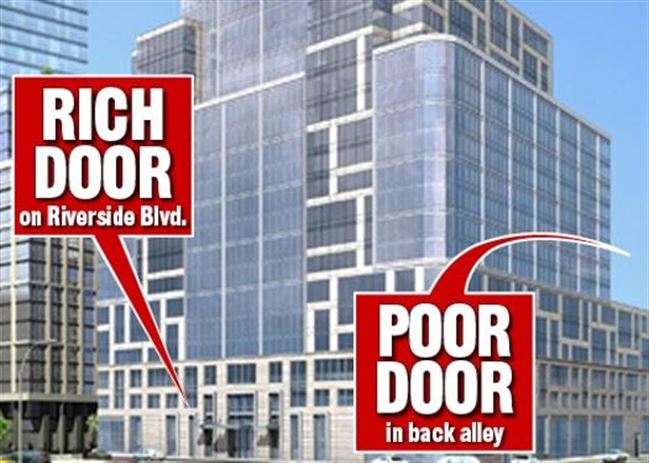 Like most places in the U.S., neighborhoods in New York City are generally divided by class lines. Like most major cities, our neighborhoods are being threatened by big “developers” who buy land cheap and sell luxary apartments at high prices. The one “gift” they give to the poor and working class people of the communities they are moving into is “affordable housing.” The existence of these units is a concession by the developers who don’t want to deal with the public backlash that comes when people are denied access
to living in their own communities. These units are often much smaller than their high priced counterparts and sometimes lack access to the accommodations of the building. Most of these “low-income” units are given to people that wait on housing lottery lists for up to 10 years and meet an income minimum.

One of these “developers” has just been approved for an apartheid building system ironically named the Inclusionary Housing Program. This program allows the developer to build separate entrances for those in the affordable units and those in the luxury units. In the case of the building at 40 Riverside Boulevard which was just approved for this program, the 55 affordable units will face the street while the 219 luxury units face the river. These 55 units will be accessed through a door located in an alley behind the building.

David Von Spreckelson, senior Vice President of another development company makes very clear how generous they feel they are being letting these poor folk live in the same building as their richer counterparts. The use of a “poor door” as far as he’s concerned, is only fair. “No one ever said that the goal was full integration of these populations. So now you have politicians talking about that, saying how horrible those back doors are. I think it’s unfair to expect very high-income homeowners who paid a fortune to live in their building to have to be in the same boat as low-income renters, who are very fortunate to live in a new building in a great neighborhood.”

Rather than building adequate housing for the people of NYC, tax breaks will go to these wealthy developers to further segregate the city. Just the other day hundreds of people lined up in the Bronx to try and access the few Section 8 housing vouchers the state decided to generously give out. Police treated the group like criminals, patrolling the line and eventually shutting it down. This just goes to show the extent of the housing crisis in NYC.