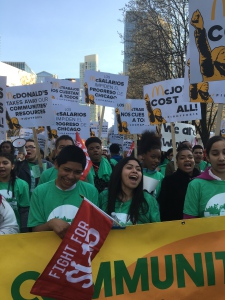 On April 14, the fight for $15 and a union took place in 300 cities and 40 countries. Workers in Chicago went on strike and took the streets in front of the different big box stores in the Loop, various Chicago universities and more.

“By striking today we are collectively holding McDonalds accountable because it is the right and fair thing to do, and we will win,” said Dominique, a warehouse worker who makes cups for McDonalds. Slogans and chants included, “McJobs Cost Us All!” and “If we don’t get it, shut it down!”. 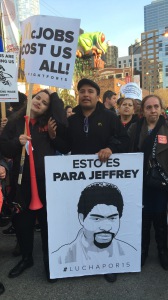 and a system that invests only in incarceration.” The connection between low wages, poverty, capitalism and the loss of Jeffrey Pendleton was noted as a systemic issue people will continue to fight against.

The rally ended in front of McDonalds with speeches, chants and a mariachi band. The fight for $15 and a union will continue to grow to more cities and countries. All revolutionaries should stand with  workers fighting for better wages, conditions, and control over their work places with a union.