The Israeli armed forces continues to shower bombs and artillery shells on densely populated civilians areas, claiming over 250 Palestinian lives — including over 60 children — since the assault began. But the Palestinian resistance is undaunted, and millions heeded the call for a general strike yesterday in outraged response to the attack.

Virtually all economic activity ground to a halt in the occupied West Bank and the majority-Palestinian areas inside of Israel’s 1948 borders. Instead, people attended mass mobilizations, both in Palestine and around the world in demonstrations of international solidarity. Popular resistance involving huge numbers of Palestinians continues even though Israeli Prime Minister Benjamin Netanyahu has given police a blank check to use unlimited violence.

Israeli missiles have destroyed multiple high rise civilian buildings, including the main building that housed international media outlets such as the Associated Press and Al-Jazeera. Attacking civilians in any situation is a war crime under the Rome Statute of the International Criminal Court (ICC). Also, attacking journalists and the press is a violation of the Geneva Convention and Additional Protocols I – in other words, a war crime.

Palestinian casulaties are continuing to mount due to the relentless Israeli military onslaught. One Israeli artillery strike on Gaza on Saturday killed at least seven Palestinians, the largest death toll yet from a single hit. Dr. Ayman Abu Al-Ouf, who led the COVID-19 team at Shifa hospital in Gaza, was killed by Israeli airstrikes. United Nations Relief and Works Agency (UNRWA) reported that the bombings in Gaza have displaced approximately 42,000 Palestinians.

These casualties establish Israel as a clear culprit in crimes against humanity. Additionally, Israel also reportedly informed international organizations about its plans to “blow up two schools: Al-Buraq & Al-Aqsa,” which were meant to be repurposed into shelters for Palestinians.

The Biden administration shamefully continues its support of the Israeli apartheid regime. Outrage is growing at an arms sale that was approved just days before the ongoing massacre began, totalling $735 million. This deal would line the pockets of the Boeing corporation, one of the most despicable war profiteers. And despite irrefutable evidence of Israeli’s heinous crimes and ongoing protests globally, the Biden administration blocked what would have been a unanimous statement by the United Nations Security Council members to declare an immediate ceasefire.

Hundreds of thousands of protesters took to the streets in the United States to demand an end to Israel’s crimes, to free Palestine and to restore Palestinians’ right to return to their homes, including a demonstration of a quarter million people in Detroit. This is clearly having an effect on the political climate, and for perhaps the first time a significant number of members of Congress are openly criticizing the United States’ unconditional support and complicity in Israeli war crimes. Similarly, cities around the world like Baghdad, Dhaka, London, Athens, Tokyo, Brussels, Paris, Toronto, and many more saw massive demonstrations against Israeli apartheid. The world stands with Palestine! 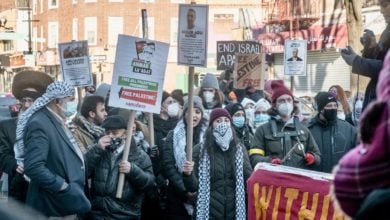 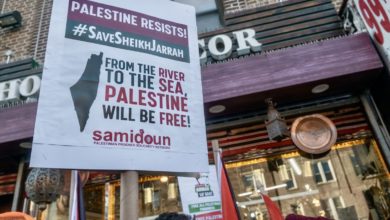