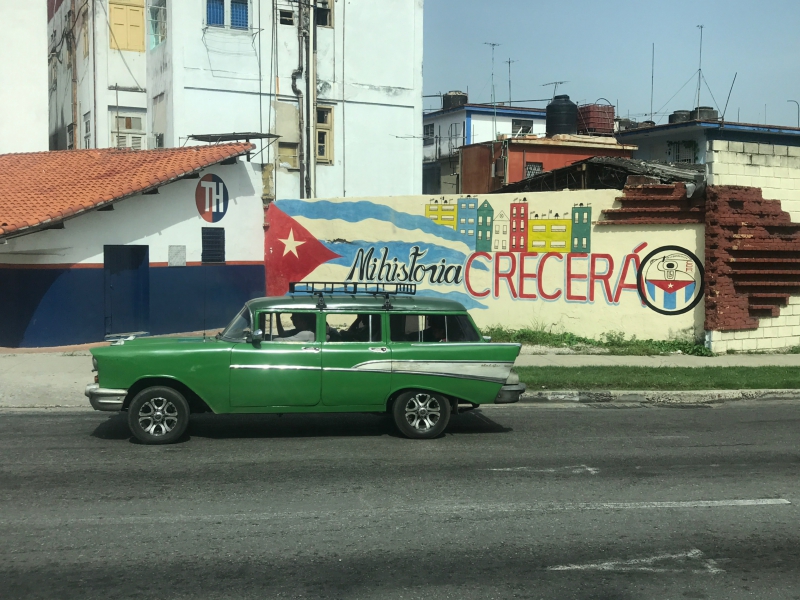 This past June, several members of the Party for Socialism and Liberation from around the country joined others on a people-to-people trip in the Republic of Cuba. The delegates traveled around the country over the course of 10 days while meeting with various community and grassroots organizations. We expressed our solidarity as the Cuban people’s stand in the face of ongoing economic genocide committed by the U.S. Empire. The author took part in this delegation.

Inside a Cuban factory

In central Cuba’s Santa Clara, the city of Ché Guevara, we visited the country’s home appliances factory: Industrial Nacional Productora de Utensilios Domésticos. It opened 55 years ago when Ché was the minister of industries. It is quite apparent that his spirit is kept alive there. 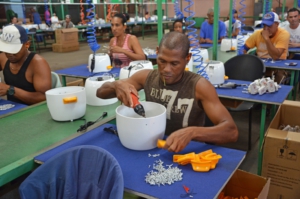 With over 1,350 workers, there are 20 different union sections organized by 109 workers. There are also members from the Communist Party of Cuba, whose work revolves around maintaining the party’s structure and communicating with the unions. Some of the products produced include vents, refrigerators, pressure cookers, freezers, rice cookers, and other kitchen and home appliances. As there is no capitalist exploiting the workers, the profits they make directly contribute to social programs such as housing, saving energy, health care and education.

Cuba’s labor laws and the newly updated constitution help foster true workplace democracy. For example, there is a negotiation commission created for the workers that develops the workplace agreements with the state. Some terms of the current agreement at INPUD include the right to work at the factory, the right to remain employed, health care, attention to workers with special needs, terms for corruption and petty crimes and terms for conflict resolution. There are also education opportunities made available for the workers, and there is even an on-site classroom.

Since Cuba has a planned economy and its constitution bans discrimination (Article 40 guarantees a right to equality), people from various levels of age and education come to work at the factory. One hundred sixty-five are licensed technicians and 116 graduated from a university. Additionally, around 45 percent of the workers are women.

Part of the worksite agreements at INPUD include special attention to the young, old and women workers in order to counter discrimination, among other workplace challenges. The youth who work there, for example, work just seven hours every three days to grow accustomed to entering the workforce. They are also accompanied by an on-site tutor. In addition, maternity leave begins at the seventh month of pregnancy and lasts until the child is a year old. INPUD sets a great example for workers’ state-owned enterprises, but it is by no means an exception in Cuba.

Despite progressive working conditions and opportunities, the 60-year blockade imposed by the U.S. government creates challenges for all the factories and workplaces in Cuba. Most raw materials have to be imported from Europe and Asia, since the United States restricts and blocks Cuba’s trade with Canada and Latin America. For example, Mexico and Panama are completely blocked from sending the materials INPUD needs.

The blockading of materials such as metals can turn a 40-day project into a six-month-long project. During the Special Period — following the demise of the Soviet Union — the factory could not obtain the materials needed to build any home appliances, so they built bikes. The bicycles helped greatly in providing transportation at a time when spare parts for buses were no longer available.

One way factories work to overcome these challenges is by partnering with universities to foster the formal education of employees — putting the aforementioned classroom to use. Students from the universities also participate in projects to help find solutions to environmental issues the INPUD factory deals with. This includes meeting the government’s regulations on cleaning emitted waste.

Workplace democracy and economic planning alleviate some of the consequences of the genocidal blockade, but by no means provide permanent solutions. For those, the blockade must end entirely.

Efforts by unionists and grassroots organizations to help improve living conditions in their own communities have been met with cooperation and funding by the Cuban government. There is a constant effort to preserve the dignity of farmworkers, who receive some of the best pay of all manual laborers. This makes Cuba an exception in the international sphere.

In the beginning of July, a national pay increase went into effect, raising the average wages for workers by an average of 27 percent. Those directly benefited are the “state-budgeted” workers, teachers, professors, media workers, doctors, nurses, librarians, cultural workers, and those working in government administration. More than 1,500,000 retirees will also receive increases in their pensions, for a total of 2,750,000 workers and pensioners who gain.

Of course, any calculation of income in Cuba must take into account that health care and education are completely free to all Cubans. Almost all Cubans own their homes and pay no taxes on their homes. Those necessities of life cost a fortune in the United States.

These sectors of state workers have had low wages for years due to the country’s economic difficulties. The nationwide increase is a recognition of their sacrifice of years in providing vital social services to the people. Economic sectors such as tourism, private restaurants, and a number of non-state entities can garner much higher incomes. Therefore, remaining as teachers, medical workers, journalists and in other jobs is a conscientious and revolutionary contribution to society.

President Miguel Díaz-Canel stated on national TV, in a series to explain the increases, that despite the enormous problems caused by Trump’s latest blockade measures, “no one in Cuba is losing sleep over the threats.” He emphasized that just as essential as the raises is the need for economic growth, higher production and more efficiency, less dependency on imports, and improvement in services.

Unlike the United States, Cuba truly does have a government that is by, for and of working people.

Effects of the new Constitution 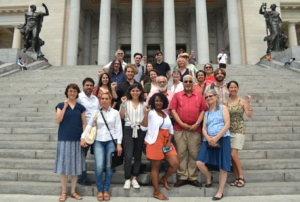 Our delegation on the steps of the newly renovated historic Capitolio, home of the National Assembly. June 2019. | Photo: Liberation News.

Our delegation had the privilege of meeting with a member of the National Assembly of People’s Power who explained to us about the new Constitution, and to explain Cuba’s political system.

On Feb. 24, 2019, there was a Constitutional Referendum, where 86.8 percent of voters (84.4 percent turnout) voted Yes to ratify the newly revised Constitution. The process of updating the 1976 Constitution took five years of drafting and holding people’s assemblies for the whole population’s input. There were over 130,000 assemblies and over 8 million Cubans participated. Many of these meetings happened in workplaces and within unions. There were over 780,000 suggestions that were taken into account, and more than half were included in the changes. These resulted in some changes to the government framework and some of its most powerful institutions.

Some of the new changes are that the president must be between 35 and 60 years old at the time of his or her first election and can only be reelected once. President Miguel Díaz-Canel is 58 years old. There will also be a re-introduction of the prime minister position.

There are also modifications to provincial government. Each province will have a governor who is approved by the National Assembly, the highest body of authority in the Republic of Cuba. Currently a provincial leader is the assembly’s president. The new Constitution includes 53 new laws that will be implemented over the next two years.

This process of democratically creating a new Constitution was executed while Cuba anticipated Trump’s enforcement of Title III of the Helms-Burton Act. This extremely harmful provision allows U.S. citizens or corporations to sue any corporation or country in the world that invests in property that Cuba expropriated after the Revolution’s triumph. The aim is to disincentive investments in Cuba.

In the face of added imperialist aggression, efficient planning is needed to overcome economic strangulation. Here is how Cuba grapples with scarcity: The Economic Department of the Communist Party proposes a budget that the National Assembly debates and votes on. All new propositions for laws, regulations (economic or other) are thoroughly discussed and evaluated within the communities before they even reach legislators. Special commissions meet, evaluate social and economic issues and make recommendations between National Assembly sessions, which happen twice a year. Special attention to the countryside and lesser-developed regions help in their development and prevent the cities and tourist destinations from gaining undue advantage. This is something that can only happen with careful economic planning in Cuba’s socialism.

With the help of a government that constitutionally bans discrimination and has actively worked to instill its people with solidarity and internationalism since the overthrow of Fulgencio Batista’s capitalist dictatorship, Cuba has built up a professional and technical sector that consists of two-thirds’ women and a National Assembly that is 53.3 percent women.

Even before their newest Constitution, the biggest difference between the United States and Cuba since 1959 has been economic. Under capitalism, political democracy is limited and corruption runs rampant. Legislative proposals in the U.S. that favor the capitalists are underwritten by tens of thousands of corporate lobbyists who fill the halls of U.S. Congress.

In the socialist Republic of Cuba, National Assembly delegates don’t even receive salaries. Their government work is voluntary and they even work their day jobs. There are no electoral campaigns — or campaign promises, for that matter — and all candidates are proposed by people who live directly within their communities or by grassroots organizations such as the Committees for the Defense of the Revolution, the Federation of Cuban Women, and the University Student Federation.

The Cuban Revolution removed the profit incentive from their society and helped foster a true democracy capable of grappling with economic challenges and climate catastrophe. That is why we need to end the blockade and struggle for our own revolution in the United States, where all working and oppressed people come together and fight for socialism. As Comandante Fidel Castro said: “Something must be done to save humanity! A better world is possible!”