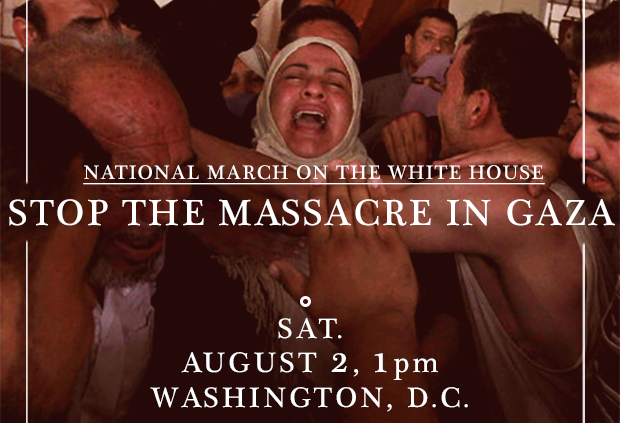 Saturday, Aug. 2, 1:00pm
Gather at the White House
Washington, D.C.
Transportation is being organized from all over the country

Join thousands of people in a National March on the White House on Saturday, August 2 at 1:00pm to condemn the Israeli massacre in Gaza.

We have been in the streets every day in cities around the country. What is needed now is a massive National March on Washington.

Israel receives $4 billion in “aid” from the United States each year. This money is being used to commit war crimes against the Palestinian people in Gaza. We are demanding that all U.S aid to Israel be ended now!

More than 200 people in Gaza have been killed and more than 1,500 have been wounded from Israeli bombs and missiles. This has to end!

Join us to demand:

Stop the massacre in Gaza! End the blockade of Gaza!
End all U.S. aid to Israel!
End the colonial occupation!