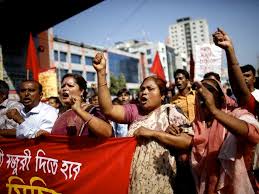 Garrett Brown, coordinator of the Maquiladora Health and Safety Support Network recently gave a Bangladesh report back and presentation to a community forum in Sacramento, Ca. He had gone to Bangladesh to meet with local labor leaders and discuss solutions to the notoriously poor safety conditions for garment workers.

Garment factory workers in Bangladesh are some of the most highly exploited workers in the world. 80% of these workers are women and only 2% are unionized. The few that are unionized do not have contracts and have been marginalized by employers and government institutions who work together to keep standards low. By keeping the price of labor next to nothing, the factory owners and government officials are able to attract large corporations such as Wal-Mart and the Gap. Although these companies make public statements about the integrity of their chain of supply, the facts on the ground tell a much different story.

Brown spoke of the numerous disasters that have taken place since the growth of the Bangladeshi garment industry in 2005. The most recent Rana Plaza disaster that cost over 1000 lives and resulted in serious injury for over 800 workers was yet another example of profits taking priority over people. Only three weeks before the collapse there had been a Corporate Social Responsibility Inspection (CSRI) that had given the facility top marks in all categories. These CSRIs were set up as a way to hold employers accountable but instead, factory owners regularly pay them off.

After the catastrophe at Rana Plaza, a mass movement of Bangladeshi worker protests and organizing efforts has won some gains for garment workers. One example is the doubling of the minimum wage to around $68  a month. While this is a victory, over 40% of employers have refused to comply with the law and have not been forced to do so. The government is run by the same elites that own the garment factories, tanneries, and brick kilns that employ the majority of Bangladeshi workers; these elites have too much to gain from continuing business as usual.

In an effort to hold these people accountable, workers have taken to the streets in the tens of thousands to demand respect. Aside from wage increases, there has also been support for an initiative known as The Accord. The Accord on Fire and Building Safety in Bangladesh is an agreement signed by some major apparel companies that opens factories to independent inspections and holds those that have signed the Accord responsible for paying for the necessary repairs. Although this is a definite step in the right direction and will result in the betterment of working conditions for thousands of garment workers, it does not solve the root causes of the problem: capitalism. However, the people of Bangladesh are aware of the injustices they deal with day to day, and they have begun to fight back.