By Dru Maxcy and Nino Brown 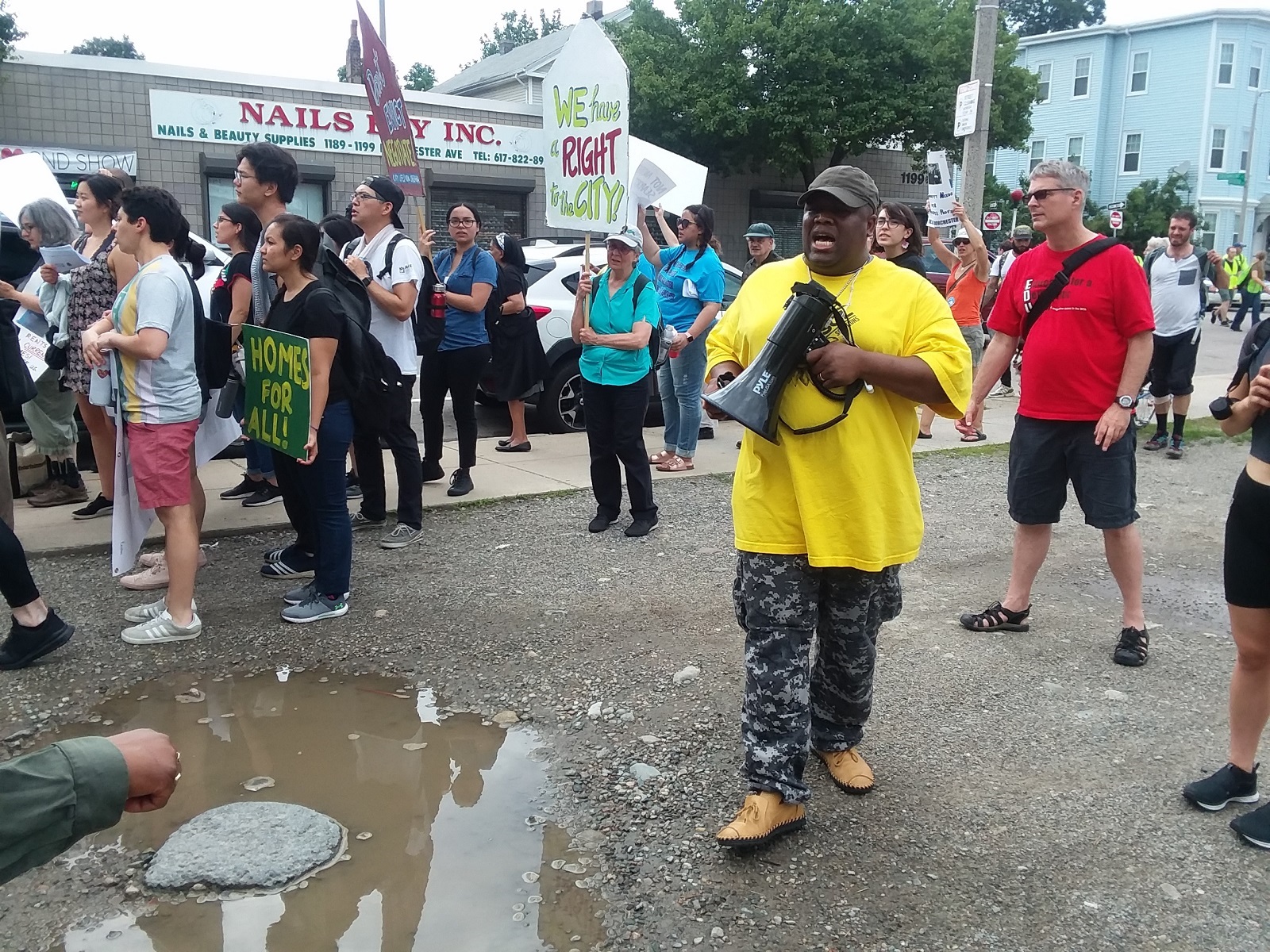 Over a hundred activists and community members braved humidity as oppressive as housing under capitalism to come together on June 29 for “Boston People’s Plan Assembly: Build a Plan to End Displacement!” The meeting started an hour late due to the residual delays from Red Line derailments earlier in June, blatantly demonstrating the intersection between housing justice and transit justice.

After a multilingual introduction and an excerpted reading from the timely and relevant “What to the slave is the 4th of July?” by Frederick Douglass, Mimi Ramos, Director of New England United for Justice, energized the participants by recounting housing victories across the United States. She mentioned the $2.5 million lawsuit win of Koreatown, Los Angeles residents against Optimus Properties LLC and the passage of state-wide rent control legislation in New York and Oregon. Ramos emphasized the crucial role that solidarity played in those triumphs and spoke of Boston’s “need to be unified with Lynn, Revere, Worcester, Springfield, Framingham… because they’re fighting these fights, too.”

After cheering and applauding, the attendees split into three groups to strategize around the assembly’s main demands: the creation of Anti-Displacement Zones, increased supply of truly affordable housing and collective governance of development. 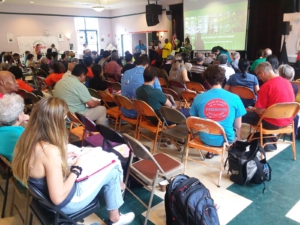 Anti-Displacement Zones are legally recognized areas with protections that help residents remain in their communities. They are of particular importance to the most vulnerable communities, such as Black and Brown neighborhoods that have historically endured redlining and “white flight” only now to be besieged by gentrification. The workshop discussed several ongoing struggles for Anti-Displacement Zones such as the Fairmount Collaborative, but focused on the need for creating more.

Still, a facilitator lamented that legal recognition under capitalism can only slow, not stop gentrification. Two other facilitators, including Lisa Owens, Executive Director of City Life/Vida Urbana, used this admission of the inherent white supremacy of capitalist housing to call for tenant organizing as a means to usher in a systemic change that would bring housing justice to the most oppressed.

The governance workshop revolved around housing victories in other cities that were won through community governance structures, and participants brainstormed how to build community governing bodies in Boston. Party for Socialism and Liberation member Nino Brown said, “There is a gap between the desires of the people and the state. We have studies on how housing under the current conditions hurts poor and working class people, particularly people of color, but there is no state intervention on our behalf, but [on behalf of] the developers. We need political power, some form of state power, or at the very least… a consistent mobilizing force that is a thorn in the side of the city government and developers.”

Ramos also talked to Liberation News about the class on affordability: “The reality is that we can’t keep talking about affordability, and not defining affordability for the families that live here now. We cannot continue to accept what the Boston Planning & Development Agency and the city is accepting as ‘affordable’ when we know we can’t afford to live in our own communities.” 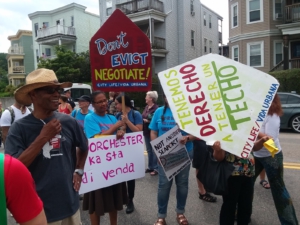 The assembly then sang verses from “El Pueblo Unido” in preparation for a march on Dot Block, the proposed 488 unit complex in Dorchester where only 66 units are slated to be “affordable” based on loosely defined guidelines. Activists carrying signs that had slogans such as “Dorchester ka sta di venda” (Dorchester is not for Sale) and “Evict the Rich!” marched a mile despite the threat of thunderstorms. They chanted the whole way, and one rallying cry stood out among the rest in its incisive condemnation of the developer: “Gerald Chan, you can’t hide! We can see your greedy side!” Local residents smiled and cheered, and numerous drivers honked their horns and raised their fists. Many bystanders took flyers for upcoming housing rights events.

Community members halted at the perimeter of the development and shared their housing struggles. One man who lived down the street from Dot Block had been “displaced from the South End” and “might be…displaced from Dorchester.” One woman, who spoke in Spanish, got to the heart of the matter. Her companion translated, “We have to get unified…to stop these evictions because we cannot allow the billionaires to continue to make so much profit.”

After the demonstration, Liberation News spoke with a Keep Codman Affordable organizer, who wanted to remain anonymous. In addition to highlighting the need for community leaders to involve more Black and Latino youth in the housing struggle, the interviewee stressed the importance of tenant organizing: “It gives people a sense of empowerment. It gives a sense of ownership. That’s the struggle that they carry with them every single day. That goes with you. Plus, I think also now your neighbors are your comrades, and that’s a huge blessing in solidarity.”