Boston grassroots organization, Mass Action Against Police Brutality (MAAPB), organized a speak out and march at Ruggles station in Roxbury, Massachusetts last night in solidarity with Minneapolis and Chicago.  Despite the rain, a spirited crowd of 100 activists stood together and took the streets to denounce the white supremacist attacks on Minneapolis’s #4thPrecinctShutDown encampment, which left five protesters seriously wounded, and the murder of Laquan McDonald in Chicago and the subsequent cover up by city hall.

Local organizers highlighted the mayor of Chicago, Rahm Emanuel’s collusion with the police, in covering up the murder of 17 year old Laquan McDonald, as well as the Minneapolis police’s reluctance to pursue the three shooters who fired on a peaceful protest. Survivors of police brutality and their families spoke about their cases and the abuse that they suffered at the hands of the police and their protectors, the politicians. Under the cold New England rain, people from diverse backgrounds were united against police terror and in pursuit of justice, so long denied.

The speak-out raised the necessity of building more militant mass action.  History has proven that for real change to occur, thousands, hundreds of thousands and millions of people must take the streets and intervene in history. Justice is not a ripe apple that descends on its own accord.  Only masses of people —conscious and mobilized—can bring real change.

The fact that the system found it necessary to indict Jason Van Dyke on murder charges is the surest proof of the titanic effect the Black Lives Matter movement has had on American society.

MAAPB issue a statement, asserting that

“There is a far right wing, white supremacist, push-back against the growing movement against police brutality and institutionalized racism. The police have a deep history of colluding with white supremacist groups like the Klu Klux Klan.”

One organizer raised the larger issue of indicting “the system,” or capitalist-imperialism, as the cause of these racist killings. The police are armed to protect current property relations, which places the status quo on top and the vast majority of us at the bottom.  It is this economic reality that results in a police killing, every eight hours in this country.

After a powerful speak-out, the group marched into the streets of Roxbury —where Malcolm X once came of age.  Racist counter-protesters, clearly out of touch with the reality in Roxbury, chanted “Respect the police” and “Obey authority.” A resounding chant —led by the Black leadership and multinational marchers— “Respect Black lives,” drowned out the brief distraction. Vastly outnumbered, the insignificant hecklers, who felt intimidated, soon dispersed. Such slavish worship of racist power structures is not dissimilar to the fascist Donald Trump and other representatives of the ruling class.

The march ended in Roxbury at the Dudley Town Common.  In unison, the activists and organizers demanded the indictment and conviction of officers Riggenburg and Schwartz for Jamar Clark’s murder, and of the racist vigilantes who attacked a peaceful crowd in Minnesota.  They demanded a murder charge for officer Van Dyke, and the impeachment of Rahm Emanuel and his administration for interfering in and delaying the criminal investigation, as well as tampering with and withholding evidence in the murder of Laquan McDonald. Lastly, the crowd insisted that the courts open all past cases of police brutality and send racist, murderous police where they belong —in a prison cell. 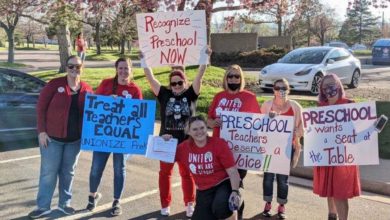 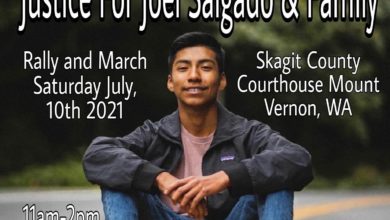