The fight vs. Boston school cuts and ‘little Trumps’ 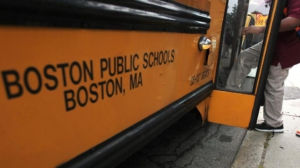 When the resistance to Donald Trump was inaugurated on Jan.  20, Boston PSL organizers made calls to #InaugurateTheResistance everywhere and to not forget the “little Trumps” in their hometowns, cities, states and local
area. For the resistance to be effective, it must be everywhere and aimed at constant struggle. Without constant struggle, it can hardly be said to be resisting. The struggle against the neoliberal austerity measure cuts to Boston public schools is part and parcel of the struggle to destroy public education. This falls in line with Trump’s political agenda of naked capitalist rule.

Locally in Boston, Mayor “Marty” Walsh has already allowed for public school cuts to happen last year wiping out many valuable jobs and resources for mainly working class families, particularly those of Black, Latinx and immigrant families. After promising that “there were no cuts,” people still lost their jobs, schools still lost librarians, libraries, after-school programs, gym teachers and more. This loss of personnel and funding only deepened the wound that the historically white supremacist and pro-segregationist education system has laid upon working class Black and Latinx families. The political establishment of Boston has managed to maintain a hyper segregation and fundamentally unequal education system. Despite it being touted as one of the best in the nation, Boston public schools still remain highly segregated economically and racially.

Massachussetts is often touted as “liberal” or “progressive,” and depending how reactionary one is, even “socialist.” The fact of the matter is that systemic racism is still a growing cancer in the Boston public school system. The civil rights movement ended “legal” Jim Crow and great advances were made, but these advances mainly affected the Black middle class and were built on sand, not translating into equality of opportunity. Caught within the bounds of liberal reformism, the struggle progressively won equality of opportunity, but not of condition. Hence, over 40 years later, Boston public schools are more segregated than before. 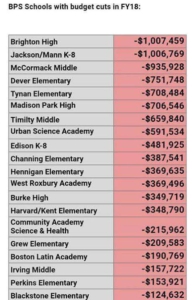 According to the Boston Globe, during the 1960’s and 1970’s “efforts to better integrate schools were offset by the growth of largely-white, suburban areas as well as by discriminatory housing practices like redlining, which helped ensure that minority students were concentrated in particular school districts. Between 1968 and 1980, the number of black students in predominantly white schools actually went down in Massachusetts. By a number of measures, segregation seems to have gotten worse.”

As of 2014, Massachusetts had seven times as many “highly segregated” schools as it had two decades ago. Highly segregated schools are “schools where at least 90 percent of the student body is non-white.” But, the question of “separate but equal” was in reality separate and unequal. Segregation was fundamentally about a deep class inequality. African Americans were not struggling to simply go to white schools because they were white schools, but because they wanted the best for their children and themselves. The schools that the average white student attended had vastly better resources than the average predominantly Black school. To frame the level of geographical segregation, “in 1980, just one in fifty black students attended such a highly-segregated school, the number is now one in four.”

The budget cuts to Boston public schools deepen the forms of apartheid still with us today. It deepens inequalities already inherent in capitalist society through the underfunding of the institutions that serve oppressed people and working class families. The No On 2 Campaign was successful in temporarily defeating the pro-corporate charter school movement. But working families in Boston are being attacked from all sides as more charter schools are still on the horizon, coupled with a deepening class inequality with the poverty rate at its highest since 1960.

Throwing away one future for another

The Bay State Banner reports “Urban Science Academy is one of 49 schools that together would lose $13 million in funding. Although the fiscal year 2018 budget contains $29 million in added funding, according to BPS officials, new programming will cost upwards of $20 million, leaving little new money to cover existing costs.”

By systematically dis-investing from public education, Mayor Walsh, superintendent Chang, and the Boston School Committee follow the austerity measure assaults on the working families and the oppressed, which are part and parcel of the Trump agenda. We should be clear minded and recognize this reality: the “liberal” political establishment carries out the same anti-people agendas as their political counterparts in the Republican Party. They are the “little Trumps” that may balk at Trump’s chauvinism, but are on the same side in the war against the working class and oppressed. The future that they are trying to build is one of naked capitalist exploitation and oppression. The School Department bureaucrats may carp about “equity,” but they drive a dagger into the backs of the people they claim to serve. The liberal stalwarts of capitalism will always continue the exploitation of the system while bellowing about abstract virtues that are in and of themselves antithetical to capitalism.

The reality they won’t admit is that our political establishment is bought off by the wealthy and corporate interests that want to see a totally privatized education system where teachers’ unions are busted, poor schools are pipelines directly into the criminal injustice system, and corporations continue to make millions from pilfering from the public sector of the economy. Given that the public sector is a sector where people of color are able to find steady work with benefits, the assault led by the “little Trumps” of Boston has that much more of a racist element to it. The future of this kind of politics is the graveyard. A graveyard for students, teachers, entire communities of working class people, and all of society.

On March 22 at the Boiling Building, teachers gathered to demand a new fair contract. Some important points the Boston Teachers Union (BTU) is emphasizing are:

There are of course other outstanding issues, such as compensation, teacher and paraprofessional assignment rights, and more—all of which need to be resolved.”

Given that the teachers are fighting for a contract and students, parents and community allies are beginning to self-organize and agitate against these cuts, there exists the possibility of broad radical unity of the people against these racist and neoliberal attacks on working families, teachers unions and students.

On December 4, 2016, hundreds of students walked out of their schools from middle school to college in response to the ultra-reactionary Trump regime’s agenda. They demanded that the mayor and governor take a stance against Trump’s agenda. The youth of Boston want their voices heard and the political establishment is not so much not listening to them, but rather hearing them and continuing their pro-corporate anti-people agenda, which is really a slap in the face given how the local ruling class likes to portray itself as multicultural and “for equity.”

Mayor Walsh would rather cozy up with corporate giant General Electric and offer the corporation free rent in Boston to spread its pollution and increasingly exorbitant prices, while “Boston has the fourth-largest gap between rich and poor among the country’s 50 largest cities” and “the top 5 percent of households earned more than $222,000 a year, 15 times more than the lowest 20 percent, which had incomes of less than $14,600 a year.”

So while the mayor is granting tax breaks for multinational corporations to set up headquarters in Boston, our students continue to suffer in hyper-segregated schools, unions are disrespected and fought tooth-and-nail, and communities continue to be gentrified by the same interests as the charter school movement.

It should be clear to all Bostonians that this political establishment may not talk like Trump, but their actions are right in line with his austerity agenda. Just last fiscal year, the city reduced per pupil funding allotments for children with autism and socioemotional needs. But whatever the politicians throw at the people, the people can throw back twice as hard. Public schools are a site of fierce class struggle as students struggle to learn and teachers struggle to improve their working conditions and thus the learning conditions for students. Families of various oppressed nationalities are unified through the school system, but their potential remains untapped so long as we continue to believe that we can negotiate in good faith with these capitalist politicians. Only with the solidarity and unity of students, parents, teachers, and all community allies can we confront the bosses, bureaucrats, and “little Trumps” in this city and state.

We need mass resistance everywhere. Walk outs, picket lines, speak outs, sit ins, teach ins, door-to-door organizing and strikes. With the recent formations of grassroots organizations, like Coalition Organized to Mobilize Boston against Trump or C.O.M.B.A.T., mass activity around immigrant defense with organizations like Cosecha, mass student walk outs and self-organization, and the rise of interest in revolutionary socialism among youth, there is reason to be hopeful about building a genuine people’s resistance to the forces of oppression and exploitation.

The ruling class has their political agenda to turn Boston into a playground for the rich and privileged. Instead of a Baker Walsh-Chang agenda, we need a student-family-teacher agenda to replace the pro-corporate claptraps and democratically transform our entire education system.