Right now, the capitalist class is trying to install a coup in Brazil bringing with it all the worst that can come from such an event—a set back in a society that is learning how to grow and overcome everything that comes with inequality.

An example, is the bigotry and sexism that is following this rise of the right wing. Brazil has a long history of sexism with the Catholic church promoting their “moral values” since the invasion of the Portuguese.

An example I can give you was of a history teacher at high school that was part of the MMM, Movimento Machista Mineiro, or the Male Chauvinists’ Movement of Minas Gerais, a well known sexist group in Brazil. He would write the “MMM thought of the week” on the blackboard in the corner and you were supposed to write it down in your notebook. These were things like, “The only thing a woman should drive is the stove.” or “Women’s place is at the laundry tub.” If you had all the “MMM thoughts” in your notebook by the end of the quarter you would receive extra credits. This was in the late 90s.

The latest statistics show that in Brazil one woman is killed every two hours. There has been a terrifying increase in the murder of Black women in Brazil—54 percent in one year.

Everyone has heard about how bad the epidemic of Zika is. It has already caused 944 microcephaly cases in the country and the estimate is that at least 3 million people have the virus. At some point, the U.N. recommended that the country “lift” its abortion law temporarily to avoid a bigger crisis of microcephaly. The Brazilian law against abortion gives you from one up to three years in prison. The Catholic church came in and blocked the action and there was no “temporary” lift.

Many of the golpista actors are using misogyny to attack Dilma. One of the rightwing magazines, ISTOE, had a cover with a photo of the president celebrating a goal at the World Cup but cropped and edited to make her look angry with a headline that implies she is emotionally disturbed, a typical sexist argument used against women. During the Lower House votes for Dilma’s impeachment on April 17, many representatives would end their vote or speech by saying, “Bye, honey!” It was disgusting to watch their speeches praising the “family,” yet another Catholic rightwing influence. In 1964, the day before the coup, a march for “The family, God and the Nation” was organized in São Paulo representing the pro-coup forces. At the House, the sentiment of those watching the votes and speeches was the same (I bet) of those who watched such a march in the 60s.

But our women are strong, of this I have not doubt. On April 19, hundreds of women surrounded the Presidential Palace with roses to give a big hug to Dilma. They were chanting, “Dilma my honey, you will stay!”

Dilma is a strong woman and the best way to represent it for me is this photo where she is sitting at her trial after being in jail and tortured with all the colonels with their faces covered and her with her head held up high. And it is easy to imagine an updated version of such a photo where Dilma without any charges has around her a bunch of corrupt sexists who are hunting her. 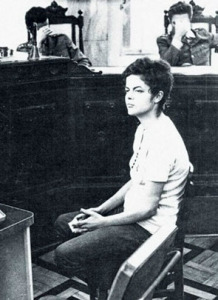 But it is not only Dilma, it is every woman and we will show that we won’t accept taking even one step back for our rights, our democracy or for everything else we want to win for the generations to come. This week, the magazine Veja tried to tell us—the women of Brazil—where our place should be. The magazine cover featured the wife of the Vice President, the coup architect, with a headline reading, “Marcela Temer: Bela, recatada, e ‘do lar.'” [Translation: “Marcela Temer: Beautiful, maiden-like, and “a housewife.”] This created a backlash on social media where women have been posting photos with the headline, “Bela, recatada, e do lar.” It is not surprising that we are seeing reactions like this to unbelievable old ideas promoted by these rightwing sectors. As I said at the beginning of this article, actions like this, of complete disrespect for the nation and the rights of millions of citizens, tend to promote these types of sexist and backwards ideas.

But we are also seeing hundreds of thousands taking to the streets expressing their rejection of the coup attempt and of misogyny. And it is with this unity that we will stop these forces and take the country back.

The women, the people on the periphery, the Indigenous, the youth, the Black, the landless, all united. As we say, “If they touch one, they touch all of us!”