Broderick is a community, not a gang 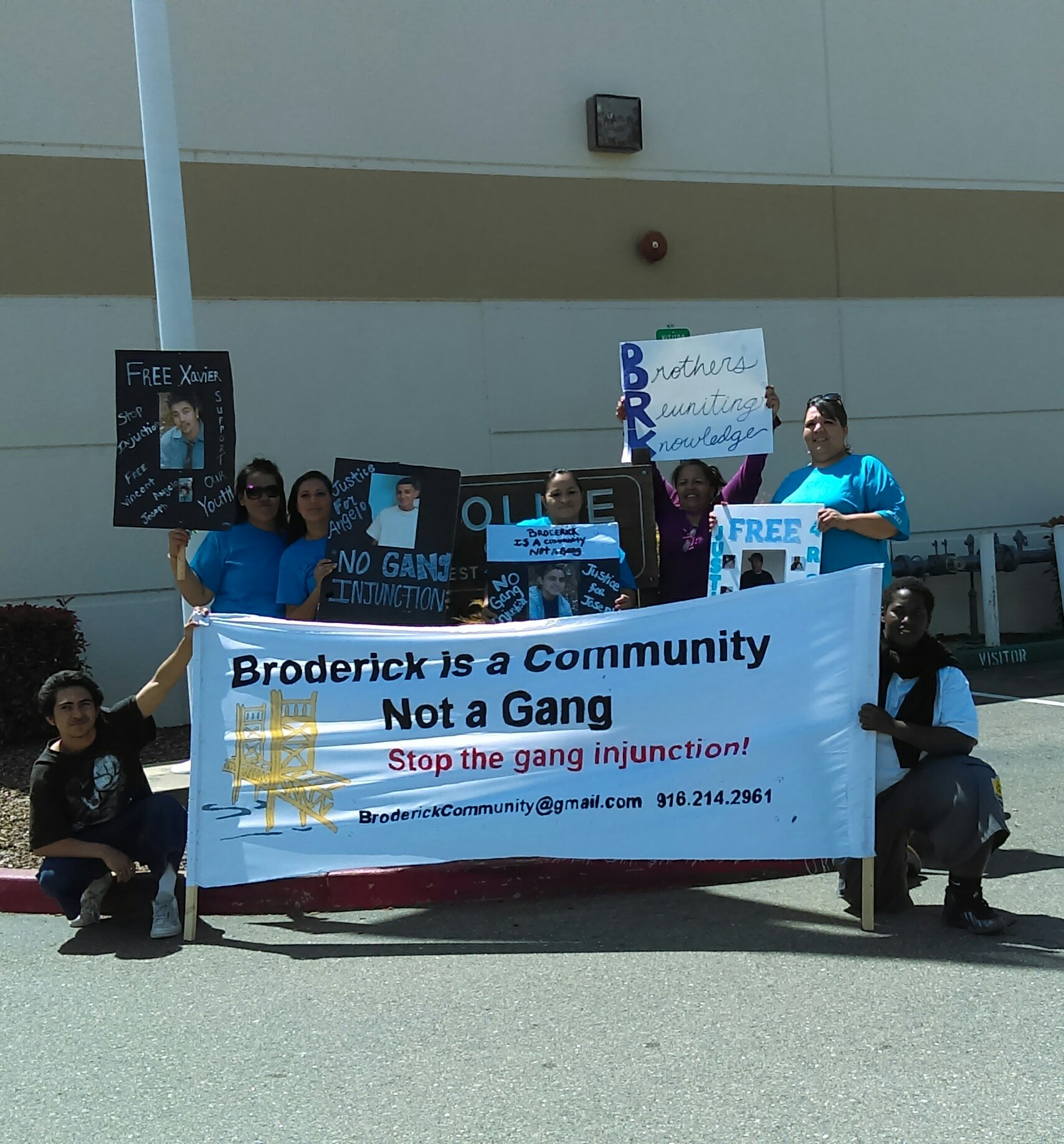 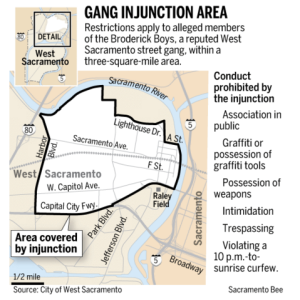 In the Spring of 2015, four mothers faced one of the worst fears for mothers in West Sacramento, the incarceration of their children. Angelo Yabes, 14, Joseph Gomez, 15, Xavier Vincent Perez, 16, and Xavier Westford, 17, were arrested, falsely accused of three pizza delivery driver assaults despite statements by the drivers that they did not see who assaulted them. These teenagers have been sitting in jail for over a year with a $2.5 million bail, with the threat of two life sentences. The four teenagers were served with a “Gang Injunction Notice” while under arrest which drastically and unjustly increases the severity of punishments.

West Sacramento Police Department Gang Unit detectives are responsible for the harassment and racial profiling that begins the process of youth criminalization. By generating documentation against youth, the top Gang Unit Detective earned $150,000 in 2015.The District Attorney is responsible for the gang Injunction’s enforcement.

The case of these four youth is just another example of the greater issues of racial profiling and lack of resources for youth in the Broderick and Bryte community. The mothers of these four youths have come together to stand up and declare that the gang injunction in West Sacramento must end.

In February of 2005, the Yolo County Superior Court entered a notoriously discriminatory permanent gang injunction against the so called “Broderick Boys.” The injunction restricts “gang members” from associating within the three-mile area bounded by Harbor Boulevard to the west, the Sacramento River to the east and Highway 50 to the south. Predictably the racist state targeted young men of color from working class neighborhoods like Broderick and labeled them gang members.

The consequence of the gang injunction enforced by racist West Sacramento police is the legalized racial profiling and harassment of young men and the criminalization of the entire Broderick community.

For example, it is illegal for two people, who the police have identified as gang members, to be anywhere near each other even in public on a bus. Alleged members are barred from public association even if they are related by family. It is also illegal for the people included in the injunction to be outside between 10 p.m. and 6 a.m. It is understood by the Broderick community both young and old that the streets are occupied by police and you always have to watch your back.

Many people who have watched the Gang Injunction grow and looked into its creation criticize it as a racist unlawful practice. Speaking with Liberation, local community activist Maria Grijalva explained that “Since the gang injunction was put in place in 2005, the West Sacramento Police Department has suppressed the civil rights of the residents. My house is within the ‘safety zone.’ WSPD is able to apply and receive gang prevention grants. Under theses grants, Anthony Herrera was hired, getting paid close to $150,000 as a ‘gang expert’ in 2015. As part of the WSPD gang prevention unit Herrera presents documentation that criminalizes the youth of West Sacramento.”

Grijalva continued, “In addition, Yolo county public defender Martha Sequeria questioned Detective Herrera during a trial and found he repeatedly provided false information. It is only correct that an independent investigation of the original documentation and reports be conducted because he was caught lying more than one time.”

Maria Grijalva, from Latino Information Network and the mothers of the four accused teenagers (Regina Martinez, Gloria Garcia, Cathy Perez and Tara Westford) have joined forces and formed a nonprofit organization called  “Broderick is a Community, Not a Gang.” Their purpose is to bring their children home, expose the harm and loss of civil rights that the racist gang injunction has in West Sacramento as well as the criminalization effects on the Broderick community.

“Our sons have been accused of robbery and were incarcerated. They were being charged as adults and threatened with life sentences. During the preliminary hearing the judge refused to allow the District Attorney to charge them as adults. He forced the charges to be dropped to ‘juvenile.’ The DA also wanted to add ‘gang enhancement’ penalties. The judge didn’t agree, all the charges were dropped; the boys were released only to be charged again (and re-arrested),” said Regina Martinez.

The gang enhancement did not stick so instead the District Attorney, Jeff Reisig, expedited their case by going to a grand jury seeking an indictment. At a grand jury hearing, only the DA is allowed to speak. The grand jury indicted the boys last week.

Maria Grijalva and the moms have been working closely and learned some background information on the case, “My understanding is that there were three pizza driver guys that were robbed in three different incidents. The four teens were accused and detained despite all the driver stating they did not see who assaulted them. The Yolo County District Attorney Jeff Reisig attempted to charge them with a gang enhancement and the charges did not stick.”

The long and complicated legal process that the gang injunction mandates has violated the constitutional and civil rights of these four teenagers and their families. A year later, the four youth have been detained for over a year without charge. A Yolo County judge concluded that there was insufficient evidence to add a gang enhancement to prosecute the young men as gang members. Yet, District Attorney Jeff Reisig continues to pursue life sentences for these teenagers.