California wildfires, climate crisis and the failure of capitalism 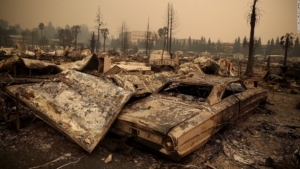 The horrific wildfires that engulfed Napa and Sonoma counties in the Bay Area this month were the deadliest in California history, burning 250 square miles, destroying at least 8,400 homes and other structures and killing 42 people, the majority older residents.

The inferno, fed by high winds and temperatures, became a firestorm in the early hours of Oct. 9 giving little time for residents to flee. The fire jumped Highway 101 and destroyed 3,000 homes in Santa Rosa – 5 percent of the city’s housing stock. Winds were so strong, giant embers the size of dinner plates were seen a mile in advance of the fire line. The thousands of fire crew members on scene that first night faced an unstoppable inferno and could do very little containment until the winds died down the next morning.

N95 masks, which residents were instructed to get, were in short supply for many of the 7 million residents of the Bay Area as the toxic smoke effects from the North Bay fires reached San Francisco and the South Bay causing emergency room visits and school closures.

People were instructed to stay indoors and keep their windows closed and their air conditioning on recirculate to keep smoke out. But in the moderate climate of the Bay Area, many, particularly lower income residents, do not have AC or air tight windows and doors. Those residents were encouraged to seek refuge in shopping malls and libraries, but with over a week of smoke impacts, there was adequate refuge for most.

N95 masks protect against particles in the air, such as PM2.5, which is so tiny that several thousand particles could fit on the period at the end of this sentence, penetrating deep into the lungs and into the bloodstream bypassing the body’s natural defenses. The catch is, if improperly fitted or if for instance the wearer has a beard, these fine particles get through. Also, N95 masks are not made for children and they provide no protection from the array of toxins in the air from burning plastics, chemicals, electronics, appliances, asbestos or lead.

Now as the two week long blazes have been contained, there is the challenge of cleanup of the toxic ash and charred remains, which is expected to take many months before rebuilding can begin.

The EPA, tasked with the first phase of cleanup, has warned that people with respiratory conditions, pregnant women and the elderly are most vulnerable to ash exposure. White ash, which occurs in high-heat fires like the recent wildfires, consists of sodium hydroxide and calcium hydroxide, which when coming in contact with water, produces a very high PH levels causing toxic alkalinity. As the Bay Area’s rainy season fast approaches, there is concern of ash reaching ground water causing making drinking water and aquatic life toxic.

There is also the problem of housing which was already in short supply in the Bay Area prior to the fires. In addition to the thousands of homes destroyed, countless more have too much smoke damage to currently be habitable. Many residents are still in emergency shelters as of this writing or in hotels or with friends or relatives.

The thousands displaced face an uncertain future. Many homeowners had fire insurance and can eventually rebuild after cleanup, while renters face already inflated Bay Area rent costs and further price-gouging that will surely occur in the aftermath of the fires.

Local representatives are looking at ways to ease housing regulations to speed up the rebuilding process and allow for more flexible solutions, but this does little to solve the long-term crisis of climate refugees.

Under socialist planned economies, housing is a constitutional right for all. Like in socialist Cuba when disaster strikes due to hurricanes, people are temporarily housed while all resources are directed to rebuild adequate housing as quickly as possible. The resources of society are pooled to solve the crisis unlike under capitalism where the burden lies almost exclusively on the individuals in the path of disaster.

Under capitalism housing is a commodity, and whatever land turns a profit is built on. So despite all logic, suburban sprawl continues to expand into fire-prone areas. To prevent future catastrophe from wildfires, dense urban housing needs to be expanded instead of urban sprawl. In general, we need sustainable development, such as eco-cities where people live close to where they work, decreasing our collective ecological footprint.

This year was the hottest on record in California and climate change will result in even higher temperatures and increasing severity and frequency of wildfires. The last few months have seen unprecedented tragedy from the collective effects of the hurricanes, floods and fires. It is all too clear that the climate crisis is upon us. At the very same time, the EPA this week took down references to climate change from their website at the direction of the new administration of climate change deniers.

We collectively need to act and demand action and resources from the government to address the current and looming crises. At the same time, we need to fight for a socialist system that is capable of transforming society into a sustainable one that pools our human and material resources to mitigate the effects of the climate crisis and create a sustainable path for the future. Instead of the system of capitalism, where the elite profit from disasters and the majority of resources are spent on death and environmental destruction, like the 54.5 percent of the 2018 budget that is going directly into the war coffers!

Join us, get active with us, or in the progressive movement in your area. End capitalism before it ends us! Together we can win!