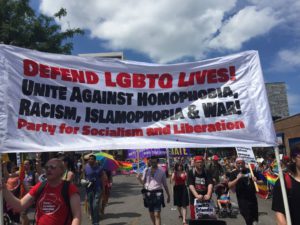 On June 26 one million people gathered at Chicago Pride to celebrate the victories of the struggle and combat the rising attacks on the LGBTQ community. Party for Socialism and Liberation members marched in a Chicago 4 Orlando contingent organized by the Gay Liberation Network to reject all attempts by the establishment to exploit the tragedy of Orlando as an opportunity to promote Islamophobia and war.

Many people in attendance mourned the loss of the 49 people murdered in the recent Orlando massacre. Despite the fresh and deep wounds suffered by the LGBTQ community, the spirit of the march was ultimately one of optimism and solidarity against oppression. Everywhere there were shirts proclaiming “We (heart) Orlando! Love wins!”

The crowd enthusiastically embraced the message of solidarity with all oppressed groups and the rejection of all attempts to divide oppressed people or turn us against one another. Along the entire two mile march route people joined in chants declaring, “Don’t give in to racist fear, Muslims are welcome here!” and “Stand up, fight back!” echoing the militant spirit of the LGBTQ movement since its birth at the uprising against police terror at Stonewall.

The PSL carried placards and banners reading “Stand with Orlando!” “Defend LGBTQ Lives! Unite Against Homophobia, Racism, Islamophobia, & War!” “Equality for all immigrants and LGBTQ people now!” and “Socialism is the answer,” tying the struggle against oppression of LGBTQ people to both the struggle against oppression of immigrants and to the capitalist system in general which thrives on such brutal forms of oppression and bigotry

All along the march, the contingent’s call for unity and militant action was met with raised fists and loud support. The struggle against anti-LGBTQ bigotry and oppression has won many important victories but the violence in Orlando has been a painful reminder that this struggle must continue and must continue where it matters most, in the streets.

No charges for cop who shot Black man in Kenosha, Wis.