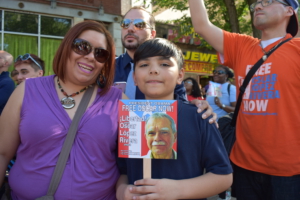 Hundreds of people came out on May 18, for a march and celebration of freedom for Oscar López Rivera. Former president Barack Obama commuted his sentence before leaving office and López Rivera was released on May 17. The celebration took place in Chicago’s Puerto Rican neighborhood, Humboldt Park, where a street has also been named after the freedom fighter. López Rivera spoke at the the unveiling of his street sign, “For the future of Puerto Rico, I believe in the youth … to transcend anything,” Rivera said. As many youth were present in the celebration of his release of a 55 year prison sentence. 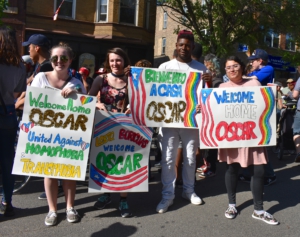 The march started outside La Casita de Don Pedro and ended inside the park, where speakers thanked and mentioned that the struggle for Puerto Rico continues. The call for unity and solidarity with Puerto Rican students was also prominent in the events of the day.The chants included, “Oscar vive, la lucha sigue!” and “Pueblo escucha, estamos en la lucha!” 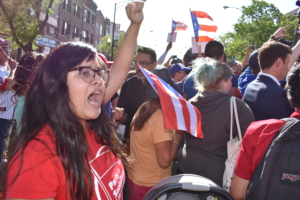 Signs read “Bienvenido a Casa Oscar” welcoming Oscar back home to Chicago, where activists have been fighting for his release for decades. Oscar López Rivera grew up as a teenager in Humboldt Park, Chicago and the area is center of struggle for the Puerto Rican community. Humboldt Park is his home away from Puerto Rico. Oscar López Rivera will always be celebrated as  a hero for unity and a fighter against the colonization of Puerto Rico and beyond.