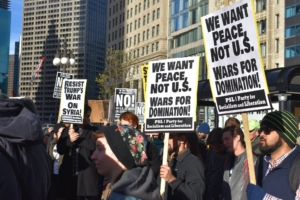 On the day following Trump’s bombing of Syria, over 250 people took to the streets of Chicago to say no to war and U.S. imperialism. On April 7, actions to say #HandsOffSyria happened in over 35 cities across the country.

The protest began at Trump Tower. While the crowd was diverse, their message was clear and unified: no new U.S. war of aggression in the Middle East! Ali Hasan from People United Against Oppression, as well as ANSWER Chicago coordinator John Beacham spoke to the crowd about rejecting the lies and war propaganda. They called on the protesters to resist yet another war that uses false pretenses to justify U.S. military actions against sovereign countries. After a short rally, the crowd took to the streets.

Marching down a busy Michigan avenue with signs and chants of “No justice, no peace! U.S. out of the Middle East!” protesters were greeted by onlookers in store fronts and on the street with lot of cheers and great approval.

For decades, spending for health care, education, and jobs have been cut, while war spending continues to increase. The people are fed up and reject more U.S. involvement in the Middle East. The people know that war is not about “spreading democracy” or “humanitarian intervention.” It is about U.S. domination and increasing profits for the richest people in this country.

At the end of the march, protesters rallied again, chanting “From Syria to Palestine, occupation is a crime!” Additional speakers included Andy Thayer of the Gay Liberation Network, Patrick of the Party for Socialism and Liberation and Erica from Worker’s World Party. The speakers addressed the links between all of the people’s struggles, drawing parallels between the struggles of Palestinians, indigenous peoples, and more. Speakers talked about the many contradictions of U.S. foreign policy, regardless of which party is in power. The evening culminated in a passionate display of solidarity against war, racism, and the Trump agenda. On April 7 in Chicago and across the country, the people stood up to say, in no uncertain terms, that there will be no more blank checks for war without our resistance.

The emergency protest on April 7 was organized by ANSWER Chicago and was endorsed by organizations such as People United Against Oppression, the Anti-War Committee Chicago, March 19th Anti-War Coalition and Workers World Party.