A chorus of voices reverberated at Federal Plaza in downtown Chicago on Oct. 20, breathing new life into the memory of Laquan McDonald’s murder on its seventh anniversary. Each year, a crowd gathers to remember his death at the hands of the Chicago Police Department, but this year’s action came with an essential new development: the nomination of former Chicago Mayor Rahm Emanuel as the Ambassador to Japan by President Biden. The hearings for the nomination occurred on the same day as the anniversary, coming as a unique pain point for those rising up against capitalist police violence and structural racism.

Laquan McDonald was 17 years old when he was shot 16 times by CPD officer Jason Van Dyke. Like many killer cops around the United States, Van Dyke had accumulated numerous documented complaints against him in the 17 years that he was on the force before the shooting. None of them resulted in any discipline or meaningful consequences by the CPD. Likewise, organizers in Chicago building support for the Justice for Anthony Alvarez campaign have witnessed a similar, tragic narrative play out regarding the cop that killed Alvarez, blatantly demonstrating the disproportionate power of police unions in protecting officers that are regularly abusive and violent on the job.

Emanuel was working on a reelection campaign as Chicago mayor when McDonald was killed in 2014. Selfishly acting upon the concern that the murder would impact his campaign, he maliciously hid the video of the death from the public until a judge forced him to release it after he was successfully reelected. Once the video was released, Emanuel’s approval rating as mayor dropped by almost half.

As the speakers fervently reminded the crowd, this instance of corruption was only one of the countless examples in which Emanuel knowingly contributed to the suffering of underserved communities in Chicago. During his tenure, he also closed 50 public schools and half of Chicago’s mental health clinics, while redirecting funds into the police department. The transparency of his legacy as one long, clear story of criminality and self-interest makes his nomination to a public seat as Ambassador to Japan especially offensive.

Dr. La’Shawn Littrice of Make Noize for Change spoke to Liberation News on the twisted irony regarding the overlapping dates of the anniversary of McDonald’s death and the hearings for Emanuel’s nomination as ambassador. “That is a huge slap in the face, a disservice, a reminder of the trauma that we face,” she explained. “This man does not deserve to hold a seat in any capacity. What he needs to do is be put in jail.”

Van Dyke’s conviction for second-degree murder, which occurred four years after the killing, was purely the result of an organized mass movement that poured into the streets to demand justice.  While the conviction was a tremendous victory in itself, speakers at the Federal Plaza action emphasized the fragility of the achievement. Prosecutors recommended a sentence of 18 to 20 years behind bars, but the judge gave the killer cop an extremely lenient sentence. Van Dyke may be released as early as February 2022, less than four years after he entered prison.

Approximately one hundred people gathered from a wide variety of local organizations, including Good Kids Mad City, Black Lives Matter Chicago, Chicago Torture Justice Center, and Ex-cons for Community and Social Change. Community leaders and organizers spoke passionately on a wide range of interrelated topics, from CPD torture centers to the connection between Zionist violence in occupied Palestine and the militarization of police domestically. Voices shouted out in remembrance of Breonna Taylor, Mike Brown, Eric Garner, and other victims of fatal police violence.

Speakers included several family members of victims of police violence. Larry Hoover Jr., whose father has been incarcerated for over 50 years and has spent most of it in solitary confinement, contrasted the difference between the 150 to 200 year sentencing of Larry Hoover and the extremely lenient sentencing of murderer Van Dyke. Chairman Fred Hampton Jr. and Justin Blake, the uncle of killer cop victim Jacob Blake, delivered passionate speeches about the impact that a single death at the hand of a police officer can have on an entire community. “Brutal language for brutal realities,” stressed Hampton Jr.

PSL organizer Shabbir Manjee highlighted the deceptive nature of the Democratic party as it tries to appeal to working-class people while representing the interests of the ruling class. This is a story that rings especially true in Chicago, a city that has had Democratic mayors for more than 90 years while continuing to endure brutal police brutality, corruption at the highest level, and accelerating hyperexploitation of Black and Brown neighborhoods. Manjee focused on the importance of building persistent, reliable movements with clear vision and direction, instead of relying on hypocritical politicians and the mechanisms of the capitalist government. “Take a look around since Biden got into office,” Manjee said to the crowd. “The police have gotten more funding. The police have gotten more weapons. They continue to shoot us, they continue to oppress us, all while trying to shove this under the rug. That ain’t right.”

Emanuel’s opposition demands more than consequences for one individual

While the event focused on Emanuel, the message of the action went beyond the impact of him as a single person. There was palpable consciousness that police brutality and oppression are systematic issues.

Emanuel’s criminality, cruelty, and aggressive obstruction of justice are actions that should land him in prison. Emanuel’s class, the ruling class, is the chief distributor of violence and oppression that is enacted abroad while recreating itself at home. The demand to hold the individuals accountable for their self-centered, destructive actions is only one part of the greater struggle at hand: to end class oppression entirely, and to take the tools of power away from those who use them in the interests of the oppressive imperialist system. 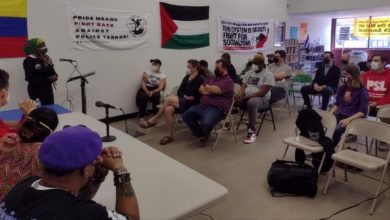