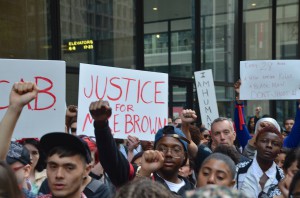 Today Chicago took to the streets, in solidarity with over 50 cities, demanding justice for Michael Brown and an end to police brutality.

Hundreds gathered for a national moment of silence for Michael Brown that lasted four minutes; one minute for every hour that cops left Michael’s body in the street after shooting him. A speaker said, “…Black lives matter, children’s lives matter and Palestinian’s lives matter…” Solidarity was not only the point of today’s action, but also the feeling that was shared among the attendees.

After poetry and speakers a spontaneous march took place. Marchers took the streets even after being instructed several times to remain on the sidewalks. One marcher said, “The reason we won’t go back on the sidewalk is because the point is we can’t walk anywhere and be safe.” The chants included, “Black lives matter!” and “No justice no peace, no racist police!”