It is no secret that community colleges across the United States are home to students from working-class backgrounds. But their college experience shouldn’t be any less than that of a student at Berkeley paying $40,000 every year.

As part of a larger campaign to privatize public education, community college administrations are cutting services across California. According to the California Community College Review, community colleges within the state will “lose $102 million over the next calendar year” due to budget cuts by the state. California representatives are effectively denying working-class students a quality education.

City College of San Francisco, supposedly a “progressive” school, is no different. In December 2018, administrators began eliminating classes and offering early retirement to faculty through the capitalist trope of “balancing the budget.” This decision has pushed back graduation dates for some students, forcing them to spend more money on tuition to stay an extra semester or two. 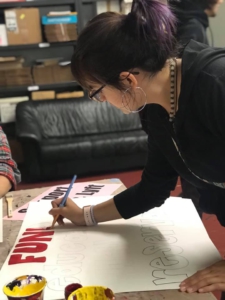 City College students are not standing idle while their school is downsized. Several student-led groups have formed on campus to organize information sessions and demonstrations and gather students to participate in public comment at both Board of Trustees and Board of Supervisor meetings.

On May 10, City College Student Assembly members and supporters gathered outside San Francisco’s City Hall armed with posters and bullhorns to protest cuts to classes and general school mismanagement. Their signs read, “fund education without reservation” and “our college, our choice, our call.”

Following the speak-out, nearly 50 students and community members gathered inside at a Board of Supervisors hearing to argue during public comment against decisions made by City College’s chancellor and administrators.

Mark Rocha, City College’s chancellor, opened his testimony claiming that “most of these changes won’t be felt in the classroom” and that the administration has been “listening intently” to student concerns.

Student and community member testimonies showed his rhetoric to be entirely contrary to the decisions of administrators. A representative from Mission Housing even pointed out that “time and time again, fiscal responsibility has been used as an excuse for austerity measures.”

Eve, a City College student, pointed out that “administrators can still find a way to squeeze their six-figure salaries and monthly stipends out of the budget.” SEIU Local 1021 member Angela Thomas spoke intently about the injustices of the American school system: “We do not fund our schools properly. It’s America … education is not for everybody.”

Chancellor Rocha, who received a vote of no confidence from both students and faculty in 2013 as president of Pasadena City College, was presented with a $403,826 severance package upon his resignation. The LA Times reported, “During Rocha’s tenure, full-time enrollment at the two-year college, long considered one of the state’s finest, dropped by nearly 13%, according to state statistics.”

Prior to his employment at Pasadena, Rocha spent five years as president of a for-profit university and is running City College with the same capitalist mentality of a for-profit organization.

Numerous times, Rocha referred to the new California state funding formula, implemented by Governor Jerry Brown in 2018, as a “student-centered approach,” which echoes the narrative of the California state chancellor’s office which has a history of downsizing colleges across the state.

The new formula bases the amount of money a school receives on student graduation rates, ignoring the many factors that contribute to graduation rates like parental education, poverty and more and excluding the other reasons people might be in school like gaining life skills. It is essentially performance-based funding, which is forcing community colleges to prioritize those who have the means to succeed with little assistance.

The Faculty Association of California Community Colleges, made up of worker-educators who actually understand the importance of public education, strongly opposed this change in funding. However, as typical within the education system, faculty voices are not taken into consideration.

City College student activists are poised to continue pressuring the school’s Board of Trustees and administrators during the last few weeks of school to place a moratorium on class cuts and to replace Chancellor Rocha. Students of City College will be joining their fellow community college students on May 22 in Sacramento to rally against the state’s attack on public education.