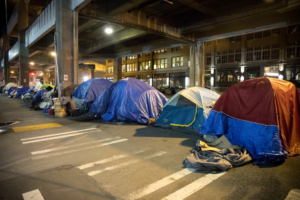 Seattle interim Mayor Tim Burgess has announced $34 million has been awarded to 30 different organizations as part of their overall allocation in the fight against homelessness in Seattle. These contracts channel money away from service provider and shelter networks such as SHARE/WHEEL (Seattle Housing and Resource Effort and the Women’s Housing, Equality and Enhancement League), towards vouchers for short-term rent subsidies, a practice known as rapid re-housing. Advocates for the homeless say rapid re-housing is a dead end that cannot effectively address the rapid rise of homelessness in the Seattle area, and are dismayed at the sweeping cuts to other shelters and care providers that have been made to facilitate this shift in focus.

The SHARE/WHEEL network comprises 237+ spots in 12 indoor shelters, all of which will be lost. In place of these desperately needed services, Seattle will have a razor-topped fence  built to prevent homeless people from sleeping under freeway overpasses.

WHEEL requested $1.1 million — the same amount the city is spending to build the fencing — and was turned down. The city cited a lack of “transitions out of homelessness” facilitated by the network, a clear nod to the new “benchmarks” the city will be using to gauge their response to the ongoing crisis, namely so-called “exits from homelessness.”

These new benchmarks embraced by city officials ignore the real conditions and experiences of homeless people and prioritize “exits from homelessness” without acknowledging the inevitable reentries back into homelessness that predictably follow some months later. This allows the city to claim an increased number of these “exits” and thus paint a picture in the public mind of a successful campaign. The focus on short-term housing hurts people in the long run by leaving them back on the street months later with an eviction on their record, which further complicates the process of making a sustained and permanent exit from homelessness.

City offers the homeless a revolving door, not permanent housing

Interestingly, the city estimates for “exits from homelessness” seem to acknowledge the reality of the situation when city leaders will not. In serving an estimated 4,000 homeless people in 2017, the city proposal claims to have facilitated approximately 3,000 “exits from homelessness,” which are ostensibly permanent transitions into housing according to the city. City estimates for 2018 already look forward to a phenomenal 7,399 “exits” made by a homeless population of less than 4,000 people!

Even taking into account the ballooning rate of dispossession which has forced so many out of their homes, these numbers cannot possibly reflect permanent transitions out of homelessness as city officials claim.

Even if all 3,000 people who had, according to city officials, been permanently housed in 2017 were replaced by just as many newly impoverished Seattleites, these claims of over 7,000 “exits” in 2018 would in fact reflect a total eradication of homelessness in the city of Seattle by the end of 2018! The reality is that these rapid re-housing steps are a revolving door at best, and one which leaves people in the cold for far too long in the interim while making it harder and harder to re-enter conventional housing in the process.

Rapid re-housing is no solution

Rapid re-housing is a short-term emergency solution which focuses on placing people with no shelter options, particularly families, in conventional apartments by subsidizing their rent for a short period of time, usually a few months. Once this subsidy runs out, these people are left to cover the “below market rate” cost of rent on their own.

In spite of having one of the highest minimum wages anywhere in the U.S., paying rent in Seattle can often be a herculean feat for those working an unstable, part-time schedule in service jobs — which is a growing part of the labor market.

Focus on rapid re-housing channels dollars away from agencies like SHARE and WHEEL that provide services, to landlords who are more than happy to take these city-subsidized rent payments, which continue to flow uninterrupted while families are re-housed and then abruptly de-housed a few months later, since a new family is always waiting to take their place.

The fundamental difficulties of securing employment that pays a living wage, finding (and affording) transportation and gaining access to adequate medical care continue to present those struggling to find shelter with seemingly insuperable obstacles. Rapid re-housing affords them only an impossibly short window of only a few months in which to overcome them.

Rent, which is often the single largest living expense for people in the Seattle area, continues to be calculated in city estimates according to the astronomically inflated “market rate” for these homes. By this sleight-of-hand, the City of Seattle is able to claim that it is offering homeless people “affordable housing,” since the negotiated rents for these subsidized homes are indeed lower than the “market rate” they would otherwise be listed for.

The city is playing the part of an unscrupulous used car salesman who doubles his usual price in order to offer the gullible customer a special half-price discount. The people of Seattle are expected to take them at their word, and also to accept the tacit implication that the homeless crisis is a moral one, a crisis of character manifesting itself in a wave of laziness sweeping the city. This perspective is inhumane, as should be obvious to anyone who connects with one of their houseless neighbors.

The course of action advocated by the city fails to take even the basic facts of the matter into account. The city has chosen to prioritize self-aggrandizing statistical victories over saving the lives of homeless Seattleites, over 100 of whom have already died on the streets in 2017. The city is leaving vulnerable people literally out in the cold for the sake of policies which only appear to show results on paper.

The state structures created in our capitalist society cannot help but ultimately serve capitalist interests.  As long as the contradictions of the capitalist system continue to play out in the particular context of Seattle, in which largely unrestrained real estate development and lack of any kind of rent control combine with an influx of well-paid technology workers, homelessness will continue to increase. The measures taken by the city can only serve as a band-aid on the gaping wound of low wages and high housing costs.

Only a wholesale reorganization of our society can give us the kind of world in which no one sleeps on the street, especially not while there is such exorbitant wealth and so many empty homes all around us.