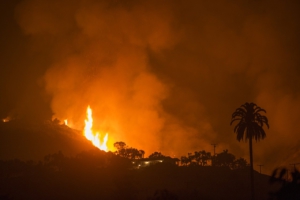 A quick search on social media for “Skirball” or “Thomas Fire,” and one can immediately see “apocalyptic” images and video footage of mountainsides engulfed in flames. The Thomas Fire began on Dec. 4 in Ventura County, Calif. and spread to over 252,500 acres (as of 8 a.m., Dec. 15). Also, in the early hours of Dec. 6, commuters traveled from the San Fernando Valley south along Interstate 405 into the Los Angeles Basin to be welcomed by the fourth fire in the three days after the Thomas Fire. Overall, hundreds of people have lost their homes, belongings and dozens of animals to these fires.

Immediately, the southern California area saw evacuation centers being opened to those affected by the fires. Liberation News went on site to the main evacuation center in Ventura County, which was located at the Ventura County Fairgrounds. We asked a volunteer at the center, named Riley, what they thought about the fire. They responded, “It’s a tragedy, you know …  Seeing so many people that lost their homes and all their valuables. I heard a few people lost their lives. I’m just trying to give back to the community.”

California is experiencing a wildfire season unlike any other. 2017 has seen wildfires throughout California. In October, one of the deadliest wildfires in northern California took the lives of a total of 44 people. The wildfires in Southern California are driven by the Santa Ana winds, like those in the north were driven by their equivalent, the Diablo winds. A UC study in 2015 showed that fires spread three times faster when being driven by dry winds after a long summer with not enough rain. The wildfire season is from late September to the end of the year. As the fires began, summer had passed, fall has arrived and winter was quickly upcoming. Climate change is affecting seasons, and the past week has seen highs of 82 degrees Fahrenheit, coupled with little to no rain over the past months.

There have been over a half dozen wildfires since the first fires began. Besides the Ventura County fire, wildfires have been spontaneously exploding from the northern part of Los Angeles county near Santa Clarita and Sylmar, as far south as San Diego County and as far east as Riverside County. The Lilac Fire, Skirball fire, Creek fire, Liberty Fire, and Rye Fire are almost contained.

The one which garnered the most attention, and was nearest to the city of Los Angeles was the Skirball Fire. It grew along one of the most highly  traveled highways, the 405, connecting San Fernando Valley to the Los Angeles Basin. It grew to over 450 acres, destroyed six structures, and damaged 12 homes near Bel-Air. On Dec. 6, the 405 was closed during the day causing massive gridlock and havoc all over Los Angeles.

The Creek Fire was the second largest of the wildfires of this month scorching over 15,600 acres, with a current containment of 98 percent. This fire destroyed at least 100 homes and other structures and led to the mandatory evacuation of over 150,000 people. All evacuations have been lifted, and folks are returning to see what they can find in their destroyed or damaged homes.

The Rye fire — at 100 percent containment — grew to a total of 6,049 acres in Santa Clarita. Ninety thousand people were forced to evacuate with a total of six homes destroyed and three damaged.

The Lilac Fire grew to 4,100 acres and at least 157 structures were destroyed, including mobile homes, and is now 98 percent contained.

The Liberty Fire in Riverside County burned a total of 300 acres with about six buildings destroyed and is at 100 percent containment.

The fires now all seem to be under control and almost fully contained; however the Thomas Fire is continuing its destruction while California is in dire need of rain.

Despite the only-partial containment of the fires, the air in the farmlands of Ventura County has become acrid with the lingering ash and other pollutants released by the fires. Despite the ashy, smoke-ridden air, agribusiness has forced farm workers to return to the fields often without any protections, such as masks, resulting in asthma attacks and severe congestion causing many to vomit and cough on the job.

Without rain or humidity, dry brush fire can quickly evolve into uncontrollable massive wildfires. However, with the Santa Ana winds, the fires spread with firefighters forced to wait out the winds and delaying the containment process. The winds towards the end of last week were some of the most severe of the year. Although late on Dec. 5 through early Dec. 6. winds diminished,  forecasters expected the Santa Ana winds to increase again overnight. Around 8pm on Dec. 6, millions of cell devices received an alert stating that “Strong winds overnight creating extreme fire danger. Stay alert. Listen to authorities.”

Fortunately, the expected increase of winds to 80 mph did not materialize. This resulted in a breath of relief for the end of the first weekend. The damage and aftermath of the fires, however, is still far from over. As of Dec. 15 most of the fires have been contained, but the lack of total containment combined with the possibility of strong winds raises the possibility that the fires will destroy more than 300,000 acres. If the Thomas fire grows, it will become the biggest wildfire on record in California.

Liberation News interviewed Professor Gregory Wood who teaches physics at CSU Channel Islands.  When asked, “What do you think contributed to the fire the most?” Wood responded, “I mean, clearly, I think that on record 13 of the 20 largest fires that are recorded in California history have all occurred since the year 2000. So, the climate’s changing. We all know why. And as the weather changes, it certainly could be contributing to this. You know, we’re in the La Nina year after El Nino year so that might have some impact. But I’m not a climatologist. They would know more about exactly why, but it seems obvious that part of the problem is that global climate change is not helping.”

These wildfires fit into the general trend of climate change. California is experiencing longer and more  frequent droughts increasing the conditions for wildfires. Scientists have confirmed this reality, and this year’s California blazes have made the reality of climate change abundantly clear. Globally, humanity has already witnessed the catastrophic hurricanes and floods from the Caribbean to Central Asia. Sea level rise and the melting poles are rapidly advancing.

Nevertheless, capitalist leaders are instead focused on the continued overproduction of unnecessary consumer goods while dumping billions of dollars into the military-industrial complex — the largest polluter on the planet — which is not only literally killing people, but diverting resources away from solutions to the climate crisis.

Without system change, the climate will continue to deteriorate, bringing more frequent and more extreme disasters like the enormous hurricanes and wildfires we have witnessed this year. One thing is clear: the planet is warming and these fires provide a glimpse of what our future holds if we do not transform the system. It is why we need to fight for a sustainable system—a socialist system built by and for the people—based on the needs of the people and the planet.