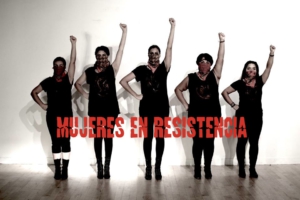 On Jan. 26,  family, friends, and comrades in struggle gathered at the Centro Cultural dela Raza to celebrate the 14th annual Enero Zapatista event. This year celebrated the ongoing resistance in the age of white supremacy and the Trump regime. This event capped off a series of events put on by the Enero Zapatista planning committee – a coalition of community organizations and individuals including the Party for Socialism and Liberation, dedicated to commemorating the Zapatistas’ uprising that occurred January 1, 1994.The organizers hosted a plethora of vendors and performers in a showcase of the vibrant cultural scene in the border region of San Diego. Set in the background of amazing murals and works of art by Chicano/a/x and Indigenous artists, the event went late into the night, reinforcing and demonstrating the strong community ties that remain.

This event continues the long tradition of the Centro playing host to radical activism. Established in the 1970s, the Centro has been a beacon of Chicano,Chicana and non-gender conforming organization and culture, a beacon that is needed now as ever before. The Red Warrior drummers led by a Kiowa elder opened the evening, calling for all Indigenous people to take back what is theirs and affirming centuries of resistance. They were followed by several other performances ranging from hip-hop to son jarocho (music from Vera Cruz, Mexico).The night was highlighted with a performance by Mujeres en Resistencia, in their red bandanas, brandishing machetes and colorful streamers in honor of the Zapatistas from which they draw inspiration. The entire night was an amazing experience which PSL counts itself beyond fortunateto be a part of.

The Party for Socialism and Liberation has been involved in the planning of Enero Zapatista for the past several years and looks forward to continued involvement. As a Marxist-Leninist party we strive to uphold the tradition of the right to self-determination for oppressed nations. Living on occupied Kumeyaayland, we recognize the colonial history and struggle of Indigenous people. We also acknowledge the history of struggles lead by Chicano/a/x people including our own members from this community. Enero Zapatista served to galvanize its attendees and remind allies what the fight was is all about, and the Party for Socialism and Liberation affirms our commitment to stand beside our allies in defense of the community.