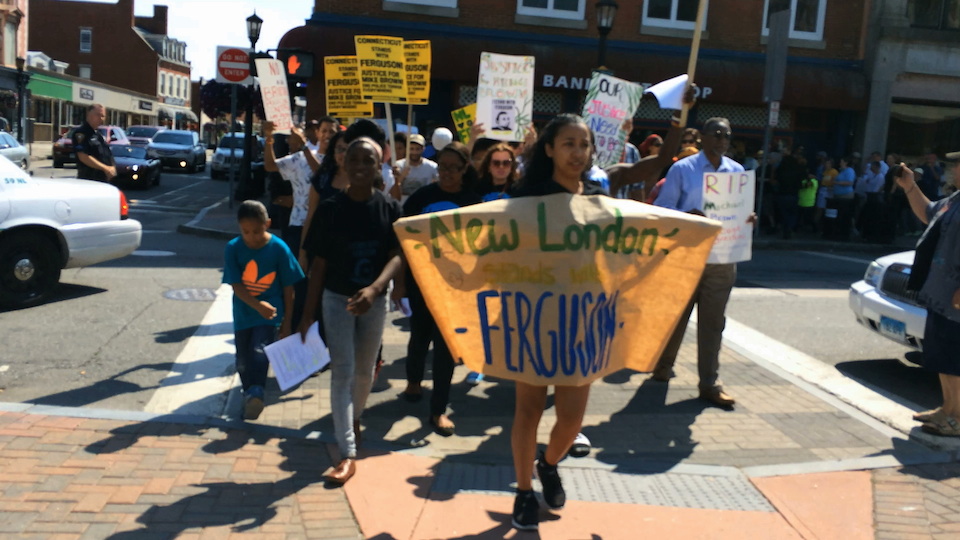 People from across Connecticut have come out to many rallies, vigils and marches in support of the rebellion in Ferguson, MO, following the police killing of Michael Brown.

In New Haven, 80 people gathered on the steps of City Hall on Thursday, August 14th and shared their stories about their own experiences with police brutality and discussed what next steps the New Haven community could take to fight back against police violence in the city. A community meeting has been called for later in August to further develop these discussions. Community activist Kevin Edwards said, “It’s going to take action, more than words, to start effecting some change around here. We’ve been saying words for some time, but until there’s some action behind the words, they never listen. Gatherings like these are all good, but after this what’s going to happen? What do you plan on doing before the next person loses their life?”

On Saturday, August 16th, dozens gathered at a busy intersection in Hartford. At the rally, organizers and the crowd performed a call and response of the names of people locally and nationally killed by police brutality, law enforcement and vigilantes: Mike Brown, Ezell Ford, Malik Jones, Amadou Diallo, Sean Bell, Oscar Grant, Trayvon Martin, Eric Garner and many more. Shamara Scott, who saw the rally and pulled over to join it, addressed the crowd: “I do believe in uprising, in peaceful uprising. We’re angry and we have a right to be. However, how are people more angry about the destruction of stores and property and not as angry at the loss of this boy’s life? We need a change.”
As the rally ended and chanted “No justice, no peace! No racist police!” a passing car horn honked in support, leading to 90 seconds of cars passing by the intersection honking and cheering.

100 people gathered on Sunday in New London and marched from the All Souls Unitarian Universalist church to downtown. Chanting “What’s his name? Mike Brown!” and “When the youth of America are under attack, what do we do? Stand up! Fight back!” the Black Is Not A Crime march and rally was led by young men and women from Hearing Youth Voices and supporters from New London Parent Advocates, CT College Teacher Education Program, CAIR (Council on American-Islamic Relations) and other community supporters. The highly spirited march led to a rally at Parade Plaza where participants shared their stories, songs and poetry. Before marching back to the church, the rally chanted the words of Assata Shakur: “It is our duty to fight for our freedom. It is our duty to win. We must love each other and support each other. We have nothing to lose but our chains,” getting louder each time in a message of solidarity and support from Connecticut to Ferguson.

More solidarity rallies are scheduled in Connecticut, including a march called by students at the Yale School of Art Tuesday, August 19th starting at Beinecke Plaza at 12:00 noon in New Haven, and a rally on Sunday, August 24th at 1PM at Main & Center Streets in Manchester.