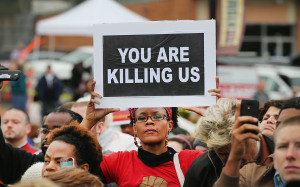 In 2015, police in the United States continued to kill at a rate far higher than every other country in the world for which statistics are currently available. That year, U.S. cops killed at least 1,200 people, more than three per day on average, according to the research of the website www.killedbypolice.net.

The exact number is not known. There is no federal agency that keeps track. The FBI compiles annual statistics for “justified homicides” by police—but participation in the program by the approximately 18,000 police agencies in the country is completely voluntary, and only about 800 actually provide reports. Most departments, including the notoriously racist and murderous New York Police Department, do not participate at all.

The FBI reported 444 killings by police in 2014, the latest report available. The FBI’s amazingly broad definition of “justifiable homicide” by police is: “The killing of a felon by a law enforcement officer in the line of duty.” The FBI classified every one of the 444 killings as “justified.”

“The Counted,” a project of the U.K.-based Guardian newspaper, documented the deaths of 1,136 people killed by U.S. police in 2015. Its extensively researched database confirmed the racist and class dimensions of police violence.

And while the FBI makes no effort to create a comprehensive database of annual police killings, the agency has very exact numbers of police officers “killed in the line of duty.” This data comes from the “Officer Down Memorial Project,” which receives funding from the federal Department of Justice.

The “Officer Down” project includes in its 2015 report six Air Force Special Agents killed in Afghanistan, and even lists all police dogs that die or are killed “in the line of duty.”

Contrary to the demagogic campaign rhetoric from a number of current candidates for U.S. president, there is no evidence whatsoever of a “war on police.” In fact, the number of police killed in 2015 declined significantly from the previous year. Police officers who died inside the United States or its territories (colonies) dropped from 133 in 2014 to 123 in 2015, the majority in both years due to illness or accidents.

Police officers killed by hostile actions—gunfire or assault—declined from 64 to 49. Given that there are more than 1.5 million police in the country, those numbers reveal that the claim of a “war on cops” is truly bogus.

U.S. cops kill at 100 times or more the rate of other countries

U.S. political leaders frequently promote the chauvinistic idea of “American exceptionalism,” the notion that the United States is the “one indispensable country,” superior to all others. It is dangerous propaganda employed to justify wars and interventions around the world.

But in the area of state violence, the United States is indeed “exceptional,” particularly as compared to other developed capitalist states.

In Britain, also a capitalist country with a long history of racism, police reportedly fired guns three times in all of 2013, with zero reported fatalities. Police do not generally carry guns on patrol. From 2010 through 2014, there were five fatal police shootings in Britain, which has a population of about 52 million. By contrast, Albuquerque, N.M., with a population 1 percent of Britain’s, had 26 fatal police shootings in that same time period!

In 2015, German police, who do carry guns, reportedly killed two people. Germany, another racist, imperialist country with large numbers of oppressed minorities, has a population about one quarter that of the United States.

While police killings in Canada, another multi-national state, have sharply increased in the past two years, U.S. cops were five times as likely to kill as their Canadian counterparts. Japan had no reported police killings in recent years.

Contrary to the myths propagated by politicians, mass media and schoolbooks, extreme racist, anti-worker and anti-poor violence has been a central feature of U.S. history since the country’s founding. U.S. capitalism was constructed on a foundation of genocidal extermination of Native people and the unpaid labor and murder of millions of enslaved Africans. The U.S. ruling class created whole agencies of armed thugs to shoot down and repress striking workers.

State violence has been an essential element of a system based on ruthless exploitation inside and outside the U.S. borders. It will only be eliminated when the system itself is.