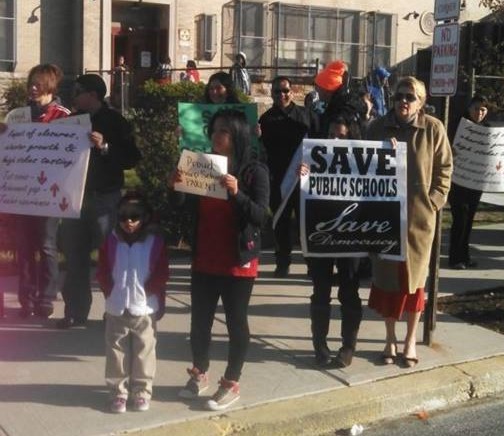 On July 11, the misnamed New Jersey Economic Development Authority handed out the third largest corporate welfare check in the state’s history in the form of $260 million tax credits over the next 10 years to Holtec, a nuclear-energy company that will be building reactors in Camden along the Delaware River.

This robbery takes places just weeks after the lay-off of 295 of Camden teachers and other education personnel in the state’s move to dismantle the Camden educational system paving the way for more charter schools to entice gentrification. Of course, cuts are always phrased in the terminology “balancing the budget” with a need to cut $28 million dollars. If Holtec paid taxes then there wouldn’t be a deficit.

So who made Camden so poor? The rich have.

Holtec International’s board includes George Norcross, one of the big bosses of the Democratic Party in South Jersey—fortunate for him there is bipartisan unity when it comes to stealing from the poor as Republican Chris Christie orchestrated this corporate hand out of $260 million.

So the people of New Jersey are paying about a million dollars for each new job (there are 235 new jobs at Holtec) being created in Camden—and even at that rate there’s no guarantee anyone from New Jersey’s poorest city will be hired. That’s to continue the racist gentrification.

To understand poverty and layoffs in New Jersey follow the breadcrumbs of corporate welfare. The Revel casino, now about to go to auction in August and declare its second bankruptcy, received the largest tax-free subsidy for 20 years from the state. The future of Revel is unknown. Next door, Showboat Casino is scheduled to close and lay off 2100 workers.

Camden teacher and blogger Keith Benson summarizes this trend regarding another recent giveaway: “Camden, NJ will soon be home to a brand new practice facility for the Philadelphia 76ers that will cost taxpayers $82 million. What does Camden get in exchange for this princely sum? Fifty seasonal—read low-paying—sales and marketing jobs.” Read the rest of Benson’s blog post here.

But, it’s not going down without a fight. On July 8, the Showboat workers organized by UNITE HERE local 54 marched in the hundreds on the Atlantic City Boardwalk. In Camden as well, hundreds of teachers, students and community members protested cuts at the steps of city hall in May.