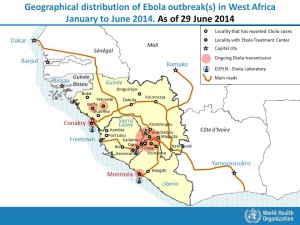 I have worked in public health for over two decades and I have been unemployed for a year. I was a former employee of the World Health Organization. My job was to collect effective indigenous approaches to infectious disease prevention, like HIV. I worked with people from all over the world, in particular people from West Africa.

More than 600 people have died in the current Ebola outbreak in West Africa. Although Ebola is highly infectious and contagious, it is preventable. I am trained to work with public health professionals to create the necessary infrastructure to address an outbreak. But I don’t have a job.

The capitalist will claim it’s not an emergency since West Africa is so underdeveloped from its colonial legacy that the lack of roads will prevent disease. That’s not much of a plan. In fact, governments who have been forced to please the imperialists have not even called a public health emergency.

The World Health Organization is at the beck and call of the imperialists as well. Although workers like me assist in developing plans for prevention and addressing crisis, it’s the IMF and World Bank who really call the shots and have the resources go where their investments are highest.

Some of the biggest problems faced by the health workers in West Africa are the lack of simple infrastructures to follow the epidemiology of the disease and prevent its spread. There are huge gaps in contact tracing, data management, and prevention and control protocols. Educating people on emergency response is primary.

When we call for money for jobs and not for war, it literally means that Obama could redirect funding from the occupation and massacre of the people of Gaza to assist in developing the necessary public health procedures to stop the spread of Ebola in West Africa. I would be in the first in line to assist.