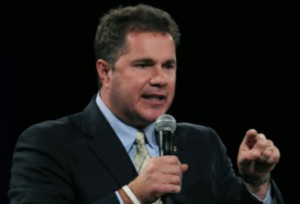 Bruce Braley, Democratic candidate for the Senate in Iowa

The most closely-watched Democratic candidates running for the Senate are promoting right-wing and racist positions on a range of issues crucial to poor and working people.

The Democrats are trying to rally their base with the message that the Senate contest has extremely high stakes this year for passing progressive legislation. But when one listens to the candidates, they sound just like Republicans.

One of the most egregious examples of this is anti-immigrant racism. After years of promising immigration reform “as a top priority” and more recently imminent executive action, President Obama announced that he would delay any move to ease the onslaught of deportations and secure rights for undocumented people until after the midterm election. He and his advisors know that Latinos are much less likely to vote in midterms – and racist whites are much more likely to vote – and made a calculation where the suffering of immigrants was worth exactly nothing.

However, on the campaign trail the Democrats’ betrayal is even more disgusting. Democratic incumbent Mary Landrieu of Louisiana was accused by her opponent of being soft on “illegal immigration.” Instead of standing with the struggle of undocumented people, her campaign put out an ad arguing that in fact her opponent was the one who was soft.

It opens with a clip of her Republican opponent saying, “Our threat is not the folks coming across the border.” A narrator responds: “Really? Landrieu thinks that is the threat. The chairman of Homeland Security Appropriations, she voted to double the border patrol, build triple-layer fencing, and voted nine times to block amnesty.”

Shilling for the energy companies, destroying the environment

Democrats have been similarly horrible on the issue of the environment. One of headings in the “issues” section on Kentucky candidate Alison Grimes’ website is her “pro-coal plan.” She promises to “fight for a national energy policy that has a prominent role for abundant coal, encourages and funds development of clean-coal technology and supports coal as an important export product.”

Not content to continue forcing people in the United States to rely on this environmentally devastating source of energy – which she falsely argues can be “clean” – this Democrat wants to support this deadly practice throughout the world.

Alaska Democrat Mark Begich shares Grimes’ disdain for the environment, and boasts on his campaign page that he “fought to move forward with permitting exploration” in areas including the Alaska National Wildlife Reserve. Begich is a champion of anti-worker budget cuts, using the classic, arrogant language of the rich. “In these tough economic times,” his “fiscal responsibility” statement says, “we all have to tighten our belts.” Begich says “After watching Washington rack up a $16 trillion national debt, I knew we had to focus on fiscal discipline … I strongly support significant budget cuts.”

Claire McCaskill, Democratic incumbent from Missouri, also has contempt for the social benefits won by poor and working people over decades of struggle. Her campaign highlights that McCaskill has introduced legislation that would “trigger automatic, across-the-board spending cuts if Congress increases direct spending or cuts taxes without offsetting the cost.”

She proudly points to her partnership with arch-reactionary Alabama Republican Jeff Sessions to introduce a regimen of cuts that would ultimately be reproduced in the Budget Control Act. This law created the “sequester” cuts, the most devastating austerity package to be passed at a federal level since the economic crisis began.

Finally, one of the most sickening positions that nearly all the Democrats running in these competitive Senate races share is support for U.S. imperialism’s latest act of aggression in Syria and Iraq. Iowa Democrat Bruce Braley said in a debate that, “ISIS is a threat that must be stopped. Anytime American citizens are attacked by a terrorist group, they need to be brought to justice or to the grave.”

Kay Hagen of North Carolina has bragged of being an early proponent of more aggressive intervention, and New Hampshire’s Jeanne Shaheen stated in a recent ad that, “I support those airstrikes. I think it’s important for us to take the fight to ISIL.”

The main event of this year’s capitalist elections is the battle for control of the U.S. Senate. The Democrats currently control this body, and Republicans need to gain six seats to seize the majority and control both chambers of Congress.

There are extremely high rates of incumbency at all levels of this “democracy for the rich,” including in the millionaire-filled Senate. Nonetheless, it is very possible that the Republicans will win the Senate majority because of a mix of political and demographic factors.

The most hotly-contested seats are in states with a strong right-wing that has been able to spread a variety of backward ideas. President Obama is increasingly unpopular, and disproportionately so in the “battleground states.”

Finally, people who turn out to vote in midterm elections are much more likely to be white, older and from the wealthier strata of society than during presidential election years – all demographics that tend to vote Republican. The Democratic base is largely unmotivated and demoralized after years of unkept promises.

Democratic politicians often try to sound progressive on the campaign trail – they can save their betrayal for after they take office. But the campaign for the upcoming midterm elections is an important opportunity to observe the political bankruptcy of the Democratic Party.

It shows that the Democratic and Republican parties represent competing factions of the ruling class.

A principled party that is fundamentally loyal to the interests of oppressed people would enter these contests willing to lose with their principles intact. Revolutionaries often try to “meet people where they’re at” and persuade those who have been infected with backwards ideas.

By contrast, the Democratic Party politicians are openly promoting such backward ideas. They care only about their careers and the interests of their corporate backers.

The Democratic Party’s opportunism is truly profound. Everything they say or do is calculated with the well-being of their system in mind, but poor and oppressed people can change their equation. While we can sometimes use it to our advantage, the capitalist electoral game is fundamentally enemy territory. To the politicians, voters are easy to manipulate, but people marching in the streets are terrifying.

Walter Smolarek is a member of the Philadelphia branch of the Party for Socialism and Liberation and a senior at Temple University studying education. He is the managing editor of Liberation newspaper.