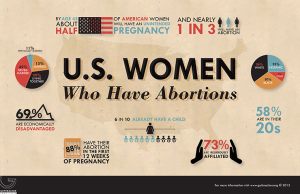 Abortion is treated in the media and by politicians as something so shameful that it should not be openly discussed, but the reality is that a large percentage of U.S. women will end up having an abortion at some point in their lives. While the Hobby Lobby decision is not directly about abortion (which in any case is not covered under the Affordable Care Act), we should look at the role the Democrats have played in undermining reproductive rights—abortion in particular—while posturing as defenders of the right to choose. The ACA is a case in point.

Taking it one step further, the Department of Health and Human Services announced in July 2010 that abortion services would not be covered in states’ “high risk” insurance pools being created under the ACA.  These pools were created so that people who previously could not purchase insurance due to pre-existing conditions would be able to do so. This means that a woman with a pre-existing condition such as cancer or heart disease is not allowed to purchase—with her own money—an insurance plan that covers abortion except in the case of rape, incest or if carrying the pregnancy to term will endanger her life.

Instead of saying that abortion is a legal medical procedure that should be covered by insurance plans that women pay for with their own dollars, the Obama administration conceded to the right and banned the procedure from the high-risk pools.

Over the years, the mainstream feminist movement has staunchly supported the Democratic Party and directed the energies of the movement to supporting Democratic candidates in the national elections, with a special focus on abortion as a key issue. The theory behind this strategy was that a Democrat president would protect a woman’s right to choose. The actions of the Obama administration regarding abortion and health care reform make it harder than ever to defend this position.