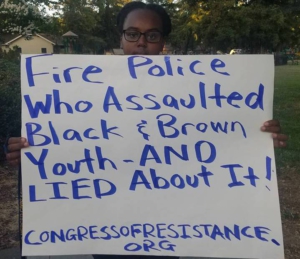 On the afternoon of April 22, five young people of color – Alex Craver, Antwoine Perry, Iszir Price, Angelica Reyes, and Elijah Williams – were brutally attacked by undercover police officers in Davis, California. The attack occurred during Picnic Day, an annual open house event on the campus of University of California, Davis that attracts over 100,000 participants.

The five victims, now known as the Picnic Day 5, were among a group of about 20 people gathered on a sidewalk corner on Russell Boulevard across the street from the UC Davis campus, some of whom were dancing. A few members of the group had spilled into the edge of the road, but traffic was still flowing freely. If someone had been walking through the neighborhood nearby, they would have seen similar groups of youth and students gathering to celebrate Picnic Day on sidewalks and often standing on the edge of roads. Many groups of youth, students, and families had also gathered in the recreation field across the street, and on lawns across the campus.

As seen in bystander videos and from eyewitness reports, a minivan with no police markings made a u-turn and drove recklessly into the group nearly hitting Alex Craver, one of the Picnic Day 5. The passengers, later identified as Officers Sean Bellamy, Ryan Bellamy and Steve Ramos, began yelling at the group and within seconds, jumped out of the minivan, began wildly throwing punches and put Angelica Reyes and her boyfriend Antwoine Perry in chokeholds. In contrast to the Davis Police Department’s later statement, the video clearly shows that none of the three undercover cops displayed their badges.

Faced with a sudden attack by an unidentified group of white men first with a car, then their fists, the youths tried to defend themselves and their friends. It was not until the attack was over that the undercover cops finally identified themselves. Despite statements from the victims and other eyewitness that they no idea that their assailants were police, the Picnic Day 5 have been charged by Yolo County District Attorney Jeff Reisig with multiple charges including “assaulting a peace officer” and “resisting an executive officer.”

Later the same day, the police released a false statement to the media that claimed the group posed “obvious safety hazards” due to “near gridlock” on Russell Boulevard and that plainclothes officers “had clearly displayed badges on their chests and visible police weapons. Before the officers could act, the unmarked police vehicle was surrounded by a large hostile group…The surrounding crowd was hostile and presented a serious threat to the officers, who were easily identifiable by their displayed badges and attire.”

Many media sources parroted the cops’ unlikely story and circulated mug shots of the young men, whom they referred to with racist terms including “thugs” and “outsiders.” Within several days, however, videos obtained by independent media sources corroborated multiple eyewitness reports that the cops had not identified themselves, had no badges or weapons displayed, and in fact had instigated the attack. Davis PD eventually deleted the false statement from their website and has announced a revised its policy regarding plainclothes officers and unmarked vehicles. The new policy expands the circumstances under which cops “must wear various types of uniforms that make them more-readily identifiable as law enforcement officers” and states that plainclothes officers may only use force in “situations when an officer acts to protect themselves or another person from imminent injury or harm.” Even under these new rules, a group of youth dancing on a street corner would not qualify as a case where force could be used.

In the wake of these revelations, Davis Police Chief Darren Pytel appointed former Sacramento sheriff turned right-wing radio host John McGinness to investigate the officers’ actions. At a press conference, Pytel praised McGinness, who was set to earn $100/hour plus expenses. This plan quickly fell apart after reports that McGinness’s tenure as sheriff included numerous cases of police brutality – which he failed to investigate further – and the online archive of his radio show exposed him as a racist. Among many racist statements was his on-air declaration that, “African-Americans in this country did much much much better before the Civil Rights Act.”

The resulting outcry led McGinness to “remove himself” from the investigation, but the police’s new choice for an investigator, former U.S. Attorney McGregor Scott, also raises questions. Scott led the 2005 investigation into a supposed “terror cell” in Lodi, Ca. The Lodi investigation has since come under heavy criticism for FBI entrapment and Islamophobia and for coercing fabricated confessions from men who had nothing to do with terrorist groups. The larger problem is that there is no real civilian oversight of the police in Davis, allowing the police department to conduct its own investigations with no transparency or accountability. The three officers have as yet faced no discipline.

Since late April, community members including students, representatives of local unions have held rallies and a march and have spoken at Davis City Council meetings to demand the DA drop the charges against the Picnic Day 5 and instead try the officers for assault and fire Chief Pytel. Justice for the Picnic Day Five, a community coalition,  released a statement calling for the charges against the Picnic Day 5 to be dropped and for justice for the youth and their families. In addition, the group is demanding the Davis Police Department and City of Davis be held accountable for the racist violence of the cops.

The morning of the assault, Alex Craver, 22-years old, spent the morning doing yard work for his grandfather. He just completed his first week working a new job as a certified forklift driver at Shamrock Foods, where he hoped to build a career. He headed out just after noon to meet his friend Antwoine Perry and Antwoine’s girlfriend Angelica Reyes, who are parents of a 7-month infant. They all managed to get away to Davis, a 45-minute trip from their home in Rancho Cordova.

In interviews with Liberation News, Craver’s mother and grandmother said that Craver, who graduated from Foothill Farms High School in the North Highlands area of Sacramento, had no idea the men were police and he was defending his friend’s girlfriend from a violent attack.

According to Craver’s grandmother Brenda Andrade, “Alex’s main concern was this guy grabbed Angelica. I’ve seen the videos of a guy grabbing hold of his friend’s girlfriend, grabbing her and punching her. Alex was brought up to never hit a woman. He did not know that guy was a police officer. When they told him he was a police officer he turned around and put his hands behind his back. When they got him in handcuffs they slammed his head against the hood of the car. I am totally against men beating women and that’s how I raised my kids and my grandkids. From the get, anyone who knew Alex, knew it was a lie. Bottom line, it is ridiculous.”

Jennifer was involved with Alex’s baseball teams when he was younger, coaching his Little League teams, and serving as president of the North Area Cal Ripken League in Sacramento. She told Liberation News, “From Little League on up my son has always been a good kid. All of his teachers and coaches praised having him in their classes. He has always had good sportsmanship. All of his peers and teammates like working with him. Now he plays baseball in an adult league; other teams want him to play on their team. He has a great attitude. My family and friends can’t believe he would do what they say. If you meet him, he is going to greet you with a handshake or a hug. He has never been in trouble.”

She continued, “From the video you see he was hanging out and dancing, the van came into the crowd, they almost hit Alex. He was having a good time. It was all so quick. Angelica was in a chokehold. There were many parties across the campus, why didn’t they break those up? If they were doing crowd control why is it all of the sudden the police are changing their rules. If your officers didn’t do anything wrong why are you changing your protocol?”

While the racist cops who attacked youth still have their jobs, pay and pension coming, the false police report and statement have immediately devastated lives of the youths and their families. The following Monday after being attacked by the police, Craver was wrongfully fired from his new job as a forklift driver. He then found work at a temp agency, but was fired again when he requested a day off to go to the arraignment hearing. According to his mother, “He had just gotten that job as a certified forklift driver. He was so proud of his job; it paid $17 an hour. Alex is about trying to build a career. He’s been working since he was 16. Him losing the job that was unfortunate. He thought he was going to do something. He thought he was going to be there a long time.”

Now out of work, Craver had to sell his car because he couldn’t make the payments. His mother had to withdraw over $10,000 for his bail and legal fees out of her retirement plan. “I’m strapped for money,” she said, “I worked at AT&T for 22 years and for what? If this case goes to court I will have to put out $4000 a day for a lawyer. I don’t have a savings. I don’t have anything to fall back on. It’s just me. I’m a single mother, it is a struggle.” Craver’s family said he is trying desperately to find work to
replace his mother’s retirement savings. Angelica Reyes also told Liberation News that the ordeal has been very physically and mentally stressful on all of the victims.

Take action to drop the charges!

Justice for the Picnic Day Five is encouraging everyone to come out to a court solidarity action August 10 at Yolo County Superior Court at 1000 Main St in Woodland. The preliminary hearing starts 10 A.M. Before going into the courtroom, supporters will begin gathering at 8 A.M. to rally outside the courthouse.

People everywhere are encouraged to immediately contact Yolo County District Attorney Jeff Reisig and Davis Mayor Robb Davis and demand the charges against the Picnic Day Five – Alex Craver, Antwoine Perry, Iszir Price, Angelica Reyes, and Elijah Williams – be dropped and the city reimburse them for lost wages and other related costs due to the violent and racist Davis Police Department. Charges should instead be brought against their assailants, Officers Sean Bellamy, Ryan Bellamy, and Steve Ramos. 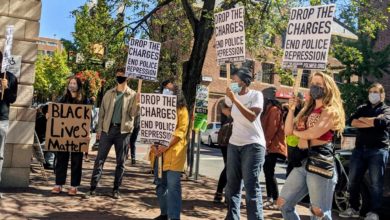