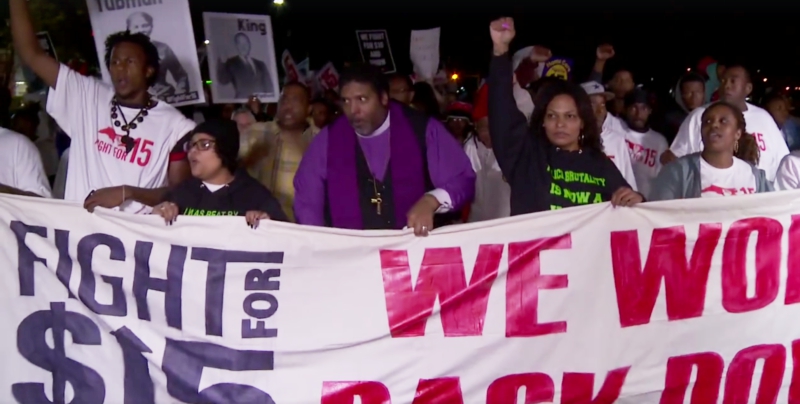 Thousands of fast-food, airport and other workers went on strike Nov. 29 in 340 cities across the country as part of the Fight for $15 movement, an activist campaign that fights for a $15 minimum wage and collective bargaining for low-wage workers.

In Durham, N.C., strikers and protesters converged on a vacant lot behind the Service Employees International Union office in preparation for the day’s action. Present were fast-food workers, hospice-care workers and university personnel, among others—some on strike, others there in solidarity.

A handful of people took the stage to explain why and for what we struggle, concluding with a speech by Rev Dr. William Barber, head of the North Carolina NAACP and leader of the Moral Monday Movement. He spoke of the great injustice done to workers and drew parallels between the current struggle and the Civil Rights Movement.

The procession of about 300 workers and their allies took to the street marching to drumbeats and chanting “What do we want?! 15!” and “Shut it down!” As the column neared Roxboro Street in downtown Durham, a major thoroughfare, coming within view of the local McDonald’s, the chants changed to “Whose streets?! Our Streets!” A contingent of 50 protesters including strikers, organizers, and other activists took to the street, sat down and shut down traffic.

This act of peaceful civil disobedience brought swift repression. Wasting little time, Durham police arrived in full riot gear, some wielding assault rifles and others what can only be called wooden beating sticks. Riot police began barking orders over a megaphone to disperse and were initially frustrated at being outshouted by labor rights activists. Eventually, the police communicated their threat to arrest any and all who occupied the street. A swarm of 60 to 70 militarized police flanked, encircled and entrapped protesters, standing shoulder to shoulder to prevent any movement into or out of the circle, though no one attempted to evade arrest.

Officers proceeded to pick demonstrators out of the group and take them into custody. Rev Barber was first to go, amidst a flurry of media photographers, and taken to a separate vehicle. For the other protesters, police had acquired a pair of buses, which transported them to the station.