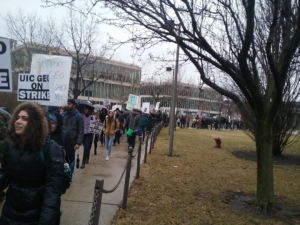 On March 20, hundreds of graduate workers, students, and community members gathered in a light rain on the University of Illinois – Chicago campus to show their solidarity for UIC graduate student workers who began striking for a fair contract the day before.

UIC employs some 1,600 teaching and graduate assistants, and many graduate employees get only a salary of $18,000 per year to meet their living expenses, often needing to take second or third jobs just to make ends meet. Meanwhile, university administrators make bloated salaries with exorbitant bonuses while the university has announced plans to spend over a billion dollars in building renovations.

Graduate workers have been without a contact since September, following over a year of failed negotiations to try to work out an agreement. Then, after months of frustration and in an incredible display of unity and class consciousness, 99.5 percent of union members voted to authorize the strike.

At the energetic rally, the need for basic financial dignity and stability was a frequent topic of the speakers, as well as the end to thousands of dollars in yearly fees that graduate workers are forced to pay. While the university depends on the low-cost labor of graduate employees to function (as a result of the strike, more than half of the classes at the university had been cancelled as of March 19), it then discards and belittles these very employees when they demand a fair wage for their work.

Colleen Levy, a graduate worker interviewed by Liberation News said that she was striking for “better wages, fewer fees and more transparent re-appointments,” and emphasized the importance of united action “because the only way that we’re going to get a fair labor contract is to withhold labor and disturb the system and show the University that we are a vital part of this system and that it cannot function without us.”

Zia, an undergraduate student at UIC, was at the rally to show “solidarity with everyone striking,” explaining that she appreciates the hard work that TAs do in her classes and believes that they deserve her support and to be heard by the administration.

After the rally, participants conducted a spirited march throughout the campus chanting “What do we want? Contract! When do we want it? Now!”

In a clear sign that the administration is beginning to feel the pressure, it was also announced that the university is now attempting to move up the date of the next bargaining session currently scheduled for this weekend.

After marching through the campus the workers affirmed their commitment to stay out on the picket line as long as it takes to get a fair and equitable contract, because, in the words of one speaker, “When we fight, we win!”