The mood was jubilant across the city. At North and Lincoln high schools, students walked out en masse to join their teachers. Hundreds of community members from all over the Northeast took over the sidewalks at the corner of 45th and Peoria. An hour-long march from East High School to downtown culminated in a massive rally of thousands at Civic Center Park.

Expressions of solidarity from students, parents and unions were everywhere you looked. 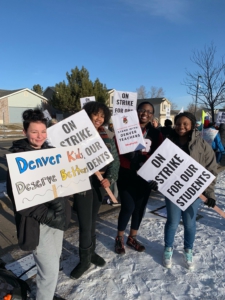 Throughout the day, Liberation News interviewed dozens of teachers, students, and supporters. Their demands were consistent and clear: pay teachers fairly, and end the assault on public education.

“Some of these teachers out here, most of them actually, helped us through our toughest times. They’re basically like second parents to us, so if they’re not being treated fairly, we might as well stand up with them.” 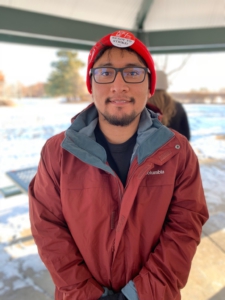 “I keep seeing turnover at our school and our kids are noticing. They get what’s happening when they just keep getting new teachers every year. I had a student speak at a community meeting, and he said that it’s going to be hard for him to get college recommendations when his teachers keep changing and they don’t really know him. So I think retention is the most important thing right now–that’s the heart of why I’m out here.”

The Mills family brought donuts out to teachers on the picket lines. 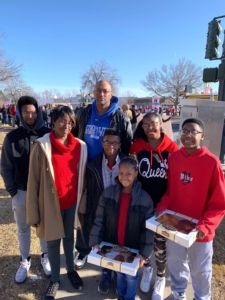 “One of my sons had a first-year teacher every year all through elementary school, and we certainly see the effects on our children, and also on educators that we know and love that are really important to our family and do such important work. We go to department stores and see teachers at their second job, and it’s disheartening. Our students love their teachers and we want to make sure that we retain good teachers and that they’re able to make a good living, and they don’t have to do so much more than they do in school. They do enough already.” 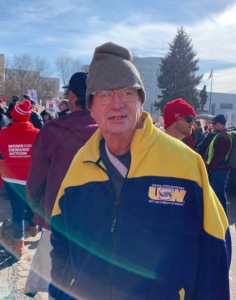 David Nebster, retired Steelworkers Union member, came to the rally to show solidarity alongside his union.

“The Steelworkers believe that when you take on one of us, you take on all of us. If we stick together, we can fight together, we can win. The corporations and the government like to pick us all off and say, ‘These are teachers, and these are carpenters, these are steelworkers.’ We can’t allow that to happen. We have to be together and we have to fight together. Otherwise we’ll all die separately.” 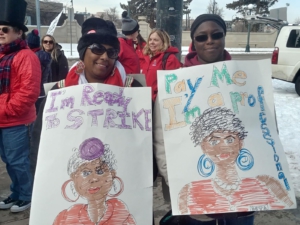 “We are striking because we know that with the difference in pay from other districts, we end up losing great teachers, which affects our students–they need stability. Secondly, I believe in showing my students that when we believe in something, that you stand and you protest. So I wanted to show them that when they want to fight for something, this is the way you do it.”