Maile Hampton, a member of Party for Socialism and Liberation, has been at Standing Rock for several weeks.

On Sunday night, the protectors tried to move a military vehicle out of the way of the blockade so it could open up, so people could see during the day the heavy militarization that was taking place. When we got there, we were immediately hit with freezing water cannons that had chemicals in the water. I say that because when we were sprayed with the water, our eyes and lips began to burn a lot, and our faces were stinging so much, it felt like they were on fire. The water began to turn to ice, and was so dangerous because people were suffering from hypothermia.

We were trying to protect people with garbage bin lids as shields from the water. I felt a blow on the side of my knee and I fell when I tried to walk. I realized I had been hit by a rubber bullet, which are actually large, hard shells covered by a kind of rubber. I don’t care what they say about “nonlethal,” if they hit you in the head or other vulnerable area, they can definitely be lethal.

We had to take off our clothes when we got back to camp, as our clothes turned all black from that “water” they were spraying. My cousin witnessed a police officer spray this man so hard, he did five somersaults down the hill.

About Sophia Wilanski, the young woman whose arm was horrifically injured by the concussion grenade. She stayed in a camp with my friends. When she was there at the blockade, she got hit in the stomach, fell into a fetal position and couldn’t move. She got carried off, and she went there again. That’s when the concussion grenade exploded on her arm.

During the week we are about 1,500 to 2,000 people and the camp swells to double that with the protectors who come for the weekend.

The scene is just so militarized. The police and DAPL security have been extremely brutal. The razor wire is 27 feet high and it goes across the entire strip of land blocking the access to the construction site.

Police can gas us, shoot us, mace us, shoot off concussion grenades, shoot us with freezing chemical water, but one thing they can’t do is break us. They cannot break our revolutionary spirits, they cannot break our smiles, our love, our resiliency, our energy our focus. What these cops don’t understand is that it’s not just us here, our ancestors are with us. Our creator is with us. That is stronger than any weapon they have to use against us for protecting the water, this earth, and our self determination. We are full of love, full of focus to protect and we will not be broken. Our smiles our love and our resistance can never be taken away from us. The winter is coming and we are readying to stand strong. 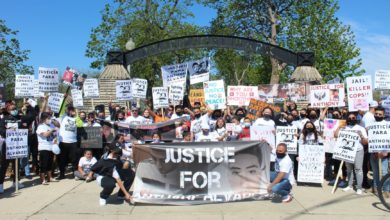