In a previous article, entitled “Behind the Federal Reserve’s interest rate hike,” I explained what was behind the Fed’s decision in December last year to raise its policy interest rates for the first time since the Great Recession. After its December meeting, the Fed issued a policy statement that projected further “moderate” expansion of the economy and estimated four more rate increases in 2016 to return monetary policy to “normal.”

The policymakers clearly hoped they had left behind the exceptional measures previously undertaken to prevent an even deeper economic collapse—bailing out the “too-big-to-fail” banks; three rounds of the Fed buying up trillions of dollars worth of government and mortgage-backed securities, a policy known as “quantitative easing”; and (through quantitative easing) keeping long-term interest rates extremely low to stimulate consumer demand—especially for housing and cars—and capitalist investment.

Fast forward to March when the Federal Reserve held another meeting, which according to the earlier projection should have seen another rate hike. Instead, the Fed announced that it not only was not raising rates but was cutting in half the number of rate increases now projected for 2016.

According to an April 15 Reuters article by Lucia Mutikani, “U.S. industrial production fell more than expected in March as manufacturing output dropped by the most in a year and mining maintained its downward trend, the latest indication that economic growth braked sharply in the first quarter.”

Mutikani further stated: “Industrial output declined 0.6 percent last month after dropping 0.6 percent in February. … Industrial production has fallen in six of the last seven months. Economists had forecast industrial output falling only 0.1 percent last month. Industrial production fell at an annual rate of 2.2 percent in the first quarter after decreasing at a 3.3 percent pace in the fourth quarter. Industrial capacity use in March fell to its lowest level since August 2010.”

Hardest hit are exploration and mining operations due to falling oil and other primary commodity prices. “Mining production tumbled 2.9 percent as oil and gas well drilling plummeted 8.5 percent after diving 15.8 percent in February,” Mutikani said. “Last month’s drop in mining output was the largest since September 2008, when output was curtailed because of hurricanes. Mining production has declined in each of the last seven months.”

Finally, Mutikani concluded, “A plunge in oil prices since June 2014 has hurt the profits of oil-field companies like Schlumberger and Halliburton, leading to deep cuts in their capital spending budgets.”

Jeffry Bartash, writing for MarketWatch, reported April 28, “The U.S. economy sputtered in the first quarter, expanding at the slowest pace in two years as business slashed investment by the steepest amount since the Great Recession.”

In a previous article, entitled “‘Strong dollar’ de-stabilizes world economy,” I explained how the strong dollar, the world’s main reserve currency, had put downward pressure on prices of primary commodities such as oil and copper—all denominated in U.S. dollars. For example, the price of oil plunged from more than $100 per barrel at its 2014 peak to under $35 at the beginning of this year, recovering to a little over $40 recently. As the Reuters article quoted above confirms, the fall in prices has had a devastating effect on mining output, a category that includes oil and gas production.

The falling prices have also pushed Venezuela and Brazil, heavily dependent on oil exports, into deep recession. The result has been mass unemployment and a soaring cost of living as their currencies depreciated, as well as destabilization of their governments. Russia, Saudi Arabia and several other countries have also been adversely affected, though less severely.

All this can be traced back to the Federal Reserve’s effort to “normalize” its monetary policy after the exceptional measures it was forced to undertake in the course of the Great Recession and its aftermath.

Since ending the third round of quantitative easing in late 2014, the Fed’s monetary base, consisting of commercial banks’ required and “excess” reserves, has actually declined (see chart).

This, in the face of continued if sluggish economic expansion, has brought about a tightening of monetary conditions and a rise in market-based short-term interest rates (see chart). 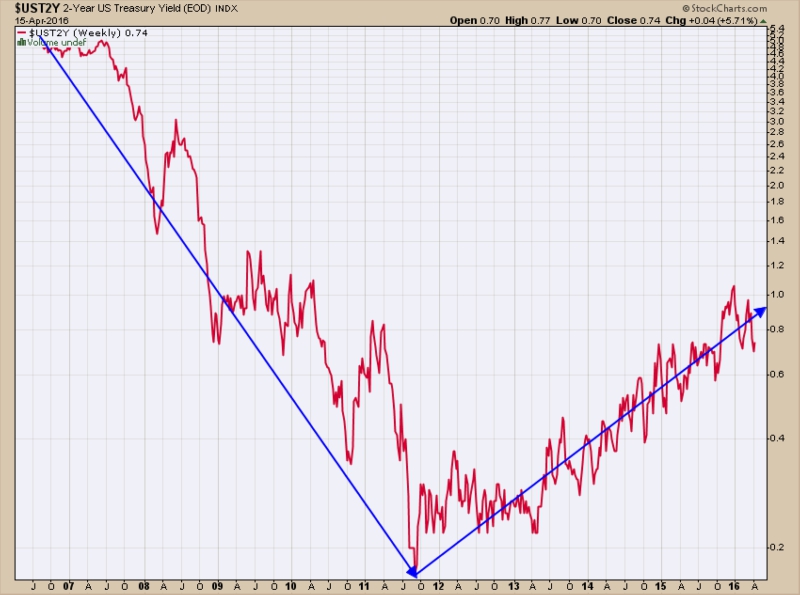 It now appears that this rise in rates, which are still well below “normal” levels, along with the stronger dollar, were sufficient not only to push Brazil and Venezuela into actual recession but also the U.S., European Union, and Japan to the brink of recession.

U.S. policymakers now face two options to head off recession: (1) reverse course and ease monetary policy by reducing policy interest rates back toward zero and initiating a fourth round of quantitative easing; or (2) increase “fiscal support” to the economy—that is, reverse the effort, which has met with some success under President Obama, to reduce the federal budget deficit and instead step up federal deficit spending.

The first of these two options is unlikely to be implemented except as a last resort. It would risk a depreciation of the dollar, runaway inflation, and a renewed run on the U.S. currency such as we last saw in January 1980. At it most recent meeting, which ended April 27, the Federal Reserve stayed pat, leaving its monetary policy unchanged.

The second option for heading off a recession now appears to be what is in the works. The Financial Times reported April 7:

“Mr Draghi said in prepared remarks that the central bank ‘cannot single-handedly create the conditions for a sustainable recovery in growth’. …

“Janet Yellen, the head of the Federal Reserve, has made similar calls in recent months, also suggesting that the US government enact more supportive fiscal policies, and noting that monetary policy by itself is likely not sufficient to completely heal the economy even years after the 2008 financial crisis.”

Deficit spending on what?

The question then arises, increased deficit spending on what? On eliminating the draconian cutbacks in social programs that were put in place after the Great Recession? On massive rebuilding of roads, bridges, water systems and other infrastructure? On large-scale replacement of fossil-fuel energy sources with renewable sources? Don’t count on it.

Rather, U.S. imperialism is now stepping up its war drive on at least three fronts: (1) increasing arms shipments directly or indirectly to the reactionary forces attempting to violently overthrow the Syrian government, as well as additional U.S. troops to Syria and Iraq, (2) increasing naval maneuvers in the South China Sea to pressure China and North Korea, and (3) expanding U.S. and NATO forces in Eastern Europe to intimidate Russia.

These moves, which increase the danger of a new world war, will inevitably increase military spending and result in lucrative new orders for the “defense” industry. That will be the short-run result. Longer-term, the government will be saddled with more debt that will have to be paid off out of tax revenues, squeezing social spending even more.

But possibly the recession that now appears imminent in the U.S. will be staved off for a time. “Responsible” members of the ruling capitalist class want this outcome. They are getting more and more nervous at the prospect of Donald Trump becoming the nominee of the Republican Party and therefore, conceivably, the next president of the United States. An economic downturn between now and the general election in November would clearly increase Trump’s chances.

Such an outcome could precipitate the biggest crisis for U.S. politics since the Watergate scandal and the impeachment of (“I am not a crook”) Richard Nixon. Therefore, the hope is that a new economic downturn can be postponed until after the election. Whether this hope is fulfilled remains to be seen.

Whatever the outcome of the ruling-class maneuvers, we are entering an especially dangerous period. We are seeing signs of a renewed general crisis of capitalism. The first phase of that crisis encompassed the First World War, the Russian Revolution, the Great Depression, the rise of fascism in Italy and Germany, and the Second World War. Many tens of millions died.

The rising mass movements—fighting against police brutality and virtually daily killings of mostly young African Americans, struggling for a $15/hour minimum wage and a union for low-wage workers, taking up the challenge of human-caused climate change, resisting mass surveillance, fighting for immigrant and LGBTQ rights, and more—need to chart an independent and revolutionary course, even while working for much-needed reforms.

This means political leaders coming to recognize that the capitalist electoral system is rigged and a dead-end road, even if at times it can be used to educate the wider public. Gloria La Riva and Eugene Puryear, the presidential and vice presidential candidates of the Party for Socialism and Liberation, are running in 2016 for exactly this purpose, as well as to build support for the growing mass movements.

The urgent need now is to continue building the mass movements into a unified force that can chart a course toward a workers’ government. Only such a government is capable of replacing capitalism with socialism and taking the other necessary steps to achieving a peaceful world.