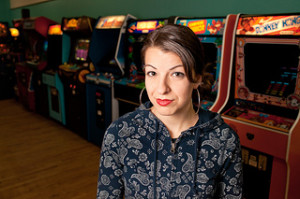 Anita Sarkeesian is a young feminist media critic and blogger who in the past few years has received media attention for her controversial YouTube series featuring hard hitting analysis of the video gaming industry and their depiction of women in games.

The controversy around her stems from the fact that her work reaches in to the disturbingly bigoted, misogynistic world of technology, “geek” culture, specifically gaming culture, and calls out that sexism for what it is.

Her vlog series has prompted a slew of graphic rape and death threats from game players, the most recent of which was emailed in to Utah State University staff just before she was to give a lecture at the school.

The writer claimed that he would commit the worst school shooting in American history if she spoke and wrote:

“Feminism has taken over every facet of our society, and women like Sarkeesian want to punish us for even fantasizing about being men. This is why I’ve chosen to target her. Anita Sarkeesian is everything wrong with the feminist woman, and she is going to die screaming like the craven little whore that she is if you let her come to USU. I will write my manifesto in her spilled blood, and you will all bear witness to what feminist lies and poison have done to the men of America.”

If that one paragraph is not a reason for women in the United States to stand up and fight back against violence against women, rape culture and sexism in general, I don’t know what is.

Besides completely misunderstanding what feminism stands for and against, this threat is a clear reflection of the normalization of rape and violence against women that is so prevalent in our culture and throughout the world.

The person who wrote this horrific threat is only one amongst many. They claimed some affiliation with #Gamergate. #Gamergate is a social media movement that started under the guise of a concern for ethical values in the gaming journalism but from the very beginning has been driven by hatred towards women.

The movement came about when game developers Zoe Quinn and Patrick Lindsey created an interactive art piece/game titled “Depression Quest” in an attempt to use the medium to explore human complexities rather than simply to entertain. Clearly there is no room provided for anything other than violently sexist entertainment in the game world because a huge backlash resulted against the game and in particular, against Quinn.

Quinn was accused of having an affair with a gaming journalist to get him to review her game. That the writer had never reviewed the game didn’t matter, as she was showered with hate messages, the final result being an anonymous post of her personal information – including home address. Fearing for her safety, she left her home and began staying with friends.

Quinn is not the only woman in the gaming industry who has been forced from her home as a result of online harassment and threats.

The #Gamergate backlash reveals two things about mass media as a tool of the ruling class. First, video game technology is used for purposes of distraction and entertainment, in order to keep part of the working class pacified.

It also functions to perpetuate women’s oppression, which serves the interests of the capitalist class. By keeping women in a subordinate position, capitalists make higher profits from our superexploitation; meanwhile, women are discouraged from standing up for their rights if even the simple exercise of free speech garners mass death threats.

Despite all of this completely in-your-face hatred of women, much of the industry has declined to comment on the issue. They stand back in silence and do not choose to value their female employees.

Unfortunately, that doesn’t come as any real shock. They make billions of dollars selling games to young people that use the same violent misogynistic storylines and play heavily on the stereotype that men must be courageous, aggressive heroes, and if they aren’t in real life, they sure can be in the game!

In short, they do not care about female gamers, and investing in indie games, or female centered games because it is not in their interest.

Though women make up 40 percent of consumers in the game industry, simply boycotting the industry to make a change isn’t enough. Furthermore, supporting the brave, intelligent, creative women in the industry who struggle to design games that are more likely to appeal to women, or speak out against
the sexism, is also not enough. Though these are noble efforts, to create long lasting change we need to attack the very patriarchal structure that holds these terrible ideologies in place.

The problem of women’s oppression and the problem of rape culture are not disconnected from the problems of racism, normalized violence, poverty, and environmental destruction amongst many others.

Feminists will always continue to stand up and stand in solidarity with one another as long as the coercive and exploitative social and political structure of capitalism continues to exist. Bringing these threats into the limelight does the misogynists no favors — it only fuels the fire of the women ready for a fundamental change in society.

Unmasked at last: All Seattle cops at fascist Jan. 6 rally have been identified