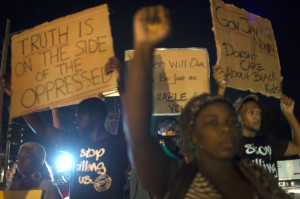 Of course, the entirety of the Black community in Ferguson and surrounding areas were represented, but a special role was played by youth. Why else would the ruling class media take so much time to slander and demonize young people as vandals and looters? “Everything was going fine,” the newspapers and networks say, “until a group of young troublemakers forced the police to step in.”

The reality is that the system is stunned and terrified at the heroic acts of self-defense carried out night after night by the youth of Ferguson. The ruling class can have all the guns and money in the world – Ferguson is proof that this can always be matched by the willingness of oppressed people to sacrifice.

This resistance has established the youth of Ferguson not only as a vanguard element in the struggle against white supremacy, but leaders of an entire generation of young people desperate to free themselves of a system that robs them of a future.

I’ve noticed that this is true in Philadelphia (and I suspect other cities) as well. At demonstrations and meetings to organize solidarity with the Ferguson uprising, young people – with crucial guidance by veteran activists and revolutionaries – are always the most eager to get started with the fight back. Even though the struggle for justice for Mike Brown continues and murderer cop Darren Wilson is still free, the rebellion has already won a key victory. Fear and cynicism have given way to confidence and hope among countless young people who are inspired by our leaders in Ferguson.