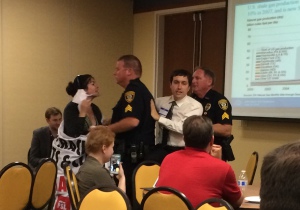 The conference was sponsored by Students for Liberty at FGCU, a student organization created with the help of a donor agreement between FGCU, BB&T, and the Charles Koch Foundation. Between 2009 and 2014, FGCU received at least $200,000 from Koch and $600,000 from BB&T. The money bought a professorship that oversees donor-created courses, an economics major, student clubs and other programming.

“Koch actually hired a teacher here, created the Economics major, and demanded that the ‘Moral Foundations of Capitalism’ be a requirement for Economics majors,” Katie Arnett, a Marine Science Major, told Liberation. “A lot of students are funded by Koch to complete this major, take the course, and then apply at an internship in one of their think tanks.”

Organizations presenting at the conference included The Institute for Justice, James Madison Institute, Heartland Institute and Reason Foundation, prominent parts of Koch’s climate change denialist efforts. As of 2014, all four organizations had received millions from Charles Koch Foundation and Koch’s “donor advised” trusts, Donors Trust and Donors Capital Fund. Students for Liberty itself has received over a million dollars in Koch money since 2009.

“I did some research [on the organizations behind the conference] and I was very upset. I didn’t know that the Koch Brothers are the second richest family in the U.S., that they’re over 100 billion dollars wealthy,” said Tatyanna Binturaqib, an Environmental Studies Major. “In 2013, Koch funded about 200 schools in the U.S. Now it’s over 400.”

The speakers list read like a “who’s who” of anti-environmentalist figures: The Reason Foundation speaker, Ronald Bailey, built his career on climate denial; Aliesa Priddy, vice chair of the Florida Fish and Wildlife Commission, is famous for hunting Florida’s black bears after voting to authorize the hunt and for targeting Florida panthers on her ranch; Isaac Orr of the Heartland Institute is nationally known for his lies in support of fracking.

According to a compendium released by Physicians for Social Responsibility in 2015, growing evidence shows that fracking is harmful even with regulations. Fracking threatens drinking water, contributes to toxic air pollution, causes earthquakes and poses serious exposure risks to those living near it.

When Orr began to speak, activists interrupted him and unfurled a banner that said, “Down with fracking, free markets, and climate denial! Build the climate movement!” As soon as they began to speak about the dangers of fracking, activists were violently grabbed by police and pushed out of the room.

“Orr was advocating for the expansion of an industry that not only contributes to climate change by releasing methane—a greenhouse gas over 80 times more potent than carbon dioxide—but that also endangers the health and safety of millions of people. We felt an obligation not to let him go unchallenged,” said Juliana Musheyev, a member of ANSWER Coalition.